The NFL may account for almost half of all sports bets made in the US, but the NBA comes in a very close second. In such a stat-fueled game, everything's up for a wager - from buckets scored and winning teams to foul counts and triple-double predictions. The high-scoring league has millions of loyal fans looking to win big in a regular season jam-packed with games.

There is an even bigger spike in interest when the NBA Finals come around. In their version of the playoffs, 16 teams battle it out in four best-of-seven rounds - giving bettors countless opportunities to take to the sportsbooks. The fanbase even carry their enthusiasm into the College Basketball scene, with the notorious 'March Madness' generating a few billion dollars in illegal bets alone. 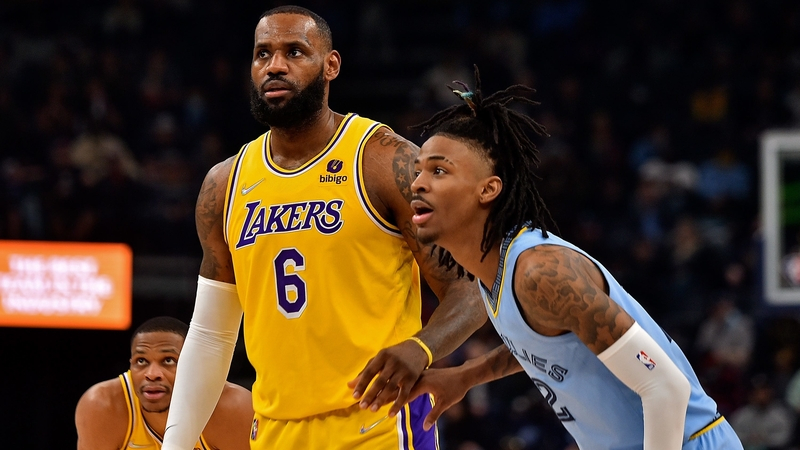 The National Basketball Association is the premier basketball league in North America and also globally dominates the sport. Since it's induction in 1936, basketball has been played in 20 Olympic Games - in that time both the US men and women's teams have won a combined 24 gold medals and missed the podium just twice.

The NBA was originally founded in New York City on June 6, 1946 as the Basketball Association of America. After merging with the competing National Basketball League, a name change was instituted and the NBA was born.

The league now comprises 30 teams (29 in the United States and 1 in Canada) who each play 82 games in a regular season between October and April, with the league's playoff tournament extending into June. As of 2020, NBA players are the world's best paid athletes - a sign of just how much money circulates the sport.

On most betting sites users can change the odds style to decimal or fractional, which may be easier to read, but American odds will be the default for users in the United States.

The simplest bet in the sportsbook is definitely the Moneyline. This is just making a bet on which team you think will win the game. If you're a straight-forward bettor, this may be your go-to. The Moneyline odds tend to be written like below:

Perhaps one of the most popular approaches in NBA wagering, is betting the spread. This wagering type relates to the margin of victory a team may have in any given game, but it is also used as a market for total points, and also for some futures bets.

A points spread is decided by the oddsmakers, who predict the potential difference in points scored by both teams. For each spread, you will have a favourite and an underdog, even by the smallest of margins. The favourite will always have a 'minus sign' in the spread and the underdog will have a 'plus sign', like so:

The Over/Under (or totals bet) is a wager on whether the total number of points scored by both teams will be over or under the line given by the oddsmakers.

In the example below, the away team is predicted to score 109.5 points. If you bet on the under, you're simply betting that they score 109 points or less, and the over is of course 110 points or more.

Parlay bets are hugely popular in basketball betting, as they allow users to combine multiple wagers into one big bet. The odds are then boosted as the probability of all bets winning becomes lower and lower as more are added. This leaves the bettor with a huge payout for a very small stake, but the chance of every bet landing is very small.

Most parlays accumulate money-line bets but most sportsbooks will allow you to include props, spreads and O/U bets as well. 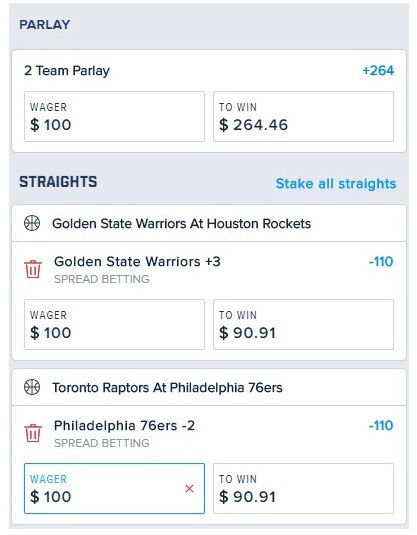 The example above is a simple Moneyline Parlay in the NBA odds - combining two bets at -110 each that produce accumulated odds of +264. This is a great example of how this type of bet can greatly boost the odds for two low-paying wagers.

Prop Bets are bets on specific outcomes in a game or throughout the season and they are split into two categories - player props and game props.

Player props concern an individual's performance in a game or long term. For example, who scores the first bucket in an upcoming game or who gets the most 3-pointers in a season.

Game props relate to specific events that may unfold during a game. For example, you can bet on who will score the most points in Q1 or which team will make the most 3-pointers in a half.

Long before the start of a season, odds for futures bets will be released. These are bets on the long term success of an individual or team for the upcoming season. Some of the simplest options will include betting on the regular season MVP or NBA Finals Champions. This betting option is usually for those more knowledgeable or experienced with the NBA as a whole.