Uncle Broomcorn’s Odd Edge: News from the fringes of normality! No. 1 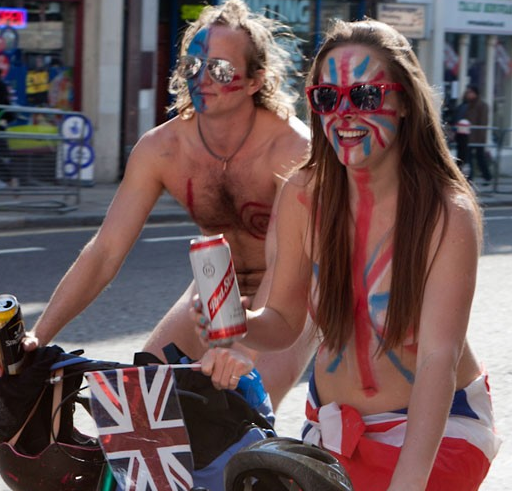 Welcome to the first instalment of Uncle Broomcorn’s Odd Edge – a roundup of news stories from the weird to the astounding. Naked Bike Ride!
If you’re not really a fan of all the competition and physical exertion involved in Britain’s sporting events this summer – what with Wimbledon, the Olympics etc... then why not give a naked bike ride a go? Earlier this month plenty of clothing-adverse cyclists took to the streets of London, baring all in celebration of World Naked Bike Ride Day! Whatever you might think about this activity, I for one am bang up for exercise where (as the picture would suggest) drinking cans of booze while you ‘get fit’ is standard practice.

“I’m pregnant with my Dad’s baby!”
Hard-hitting British tabloid newspaper ‘The Sun’ recently ran the story of a 28-year-old woman rumoured to be pregnant with her father’s child. Penny Lawrence grew up without her father Garry after he fled Dublin when the parents of his then girlfriend (Penny’s Mother) would not allow Garry and Penny's Mother to marry. It was after her Mum passed away that Penny determined to track down her Dad, and upon meeting for the first time they claim to have felt a deep sexual attraction to one another. Penny Lawrence is quoted as saying she desperately wants to have her father’s child, but that they have agreed to terminate the pregnancy if the three-month scan shows a birth defect.

Incredible triathlete completes his 41st race... at age 91!
Arthur Gilbert is the world’s oldest triathlete, and recently completed his 41st swimming, running, and cycling event. 91-year-old Arthur, a World War 2 Veteran, finished the triathlon in just under 2 hours and 48 minutes. Arthur claims it does not come easily; things are tougher as you age, he claims, but that doesn’t seem to keep him from his rigorous training regime of swimming 50 lengths every morning, two gym visits a week, and a 25 mile bike ride every Sunday – presumably without a can of lager.

Ikea employs security guards to prevent gypsies from using their car park
An Ikea in Croydon, South London has recently come under fire for alleged racial profiling of their customers in actions that were put in place to prevent gypsies from parking up on the premises. People were stopped at the entrance gate - largely according to the type of vehicle they were driving - and routinely asked “Are you gypsies?” One such customer Mr. Massey (from Streatham, South London) claims he argued with security for some time before they were satisfied that he was not a gypsy and let him in!

Got a weird, astounding, or just hilarious news story that you want to share? Then why not tell us about it in the comments section below? Anything particularly amazing will be rewarded with RakeTheRake hoodies, shirts, and baseball caps!