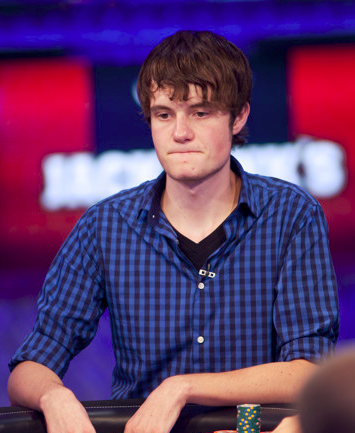 As you may have already heard, the 2012 WSOP Main Event final table has been decided, and nine lucky players will be competing for the $8.5 million top prize. Not surprisingly, a good portion of the “October Nine” comes from the online poker realm. The following players are normally used to grinding in cyberspace and taking advantage of the best rakeback deals to boost their earnings – but come October 28th, 2012 – they’ll be competing face to face with millions of dollars on the line.

Andras Koroknai (currently second with 29.375 million chips)
The first online poker pro we’d like to discuss here is Andras Koroknai, who worked his way into second place over the course of the Main Event’s final day. Koroknai makes his living through online cash games, which means that he relies on a lot of rakeback. However, the Hungarian also made a huge score after winning the 2010 L.A. Poker Classic title along with $1,788,040. Greg Merson (currently third with 28.725m chips)
Merson is an American online poker player who relocated to Canada following Black Friday. Like Koroknai, he makes most of his money with online ring games under the name “gregy20723.” However, Merson has also managed to win over $200k in online poker tournaments along with a 2012 WSOP Event #57 title ($1,136,197). Robert Salaburu (currently seventh with 15.155m chips)
27-year-old Robert Salaburu exemplifies the stereotypical internet poker pro story since he dropped out of college after earning so much money through the game. The San Antonio, Texas native has made some really big online poker tournament cashes under the name “treadindank,” and he’s set for a massive live tourney cash in the Main Event. Jacob Balsiger (currently eighth with 13.115m chips)
Although not a full-time pro, Balsiger does manage to earn some nice profits through his online poker play. And considering that he’s now on the Main Event final table, it will be interesting to see if the 21-year-old continues attending Arizona State University after his future cash. As you can see, there are plenty of online grinders who are eyeing some major money in late October. Even ninth place is guaranteed to make over $754,000 – although everybody will no doubt have the $8.5m top payout on their minds. Now that we’ve thoroughly discussed the online poker pros involved in the Main Event, here’s a look at the overall chip counts.