WSOP Winner Oleksii Kovalchuk Proves Anybody Can Make It In Poker 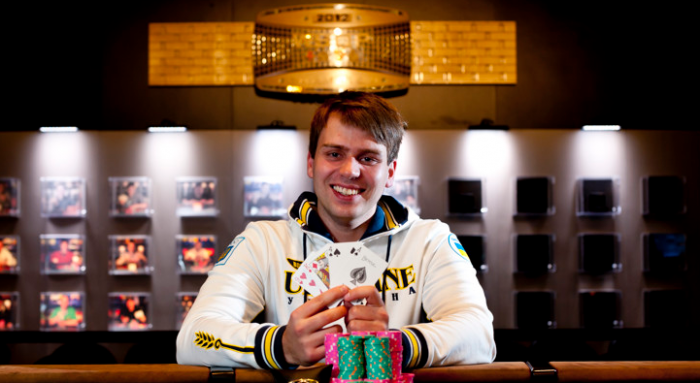 The pervading thought in poker is that only skilled players win profits with the game. And while this may be true to a degree, there are plenty of examples of players winning a major poker tournament despite their lack of experience. The Ukraine’s Oleksii Kovalchuk is definitely a good example of this since he won a big tournament in a game he’d never played before.

From Novice to Champion
To be perfectly clear, Oleksii Kovalchuk is not a beginning poker player since he’s been grinding in live events since 2011. However, when it comes to Mixed-Split 7 Card Stud/Omaha, the Kiev native had never played one hand of this game. Taking this into account, it’s all the more impressive that Kovalchuk decided to learn against the world’s best Mixed-Split 7 Card Stud/Omaha players in the 2012 WSOP Event #42 tournament.

When the $2,500 buy-in tourney started, the 22-year-old looked to his friends for advice as he said, “I asked my friends what starting hands are good. They explained it to me, so I was waiting for those hands and looking as I play at the table.” Kovalchuk’s buddies must have given him some REALLY good advice because he went on to win the Mixed-Split 7 Card Stud/Omaha tournament along with $228,041.

After the reality of what he’d done set in , the Ukrainian said “It’s like a fairytale – a guy who sits in the tournament and doesn’t know the rules and wins. How can that happen? How do you explain that?” With this fairytale win, Kovalchuk is now the Ukraine’s only player to earn two WSOP gold bracelets (he also won a 2011 Hold’em tourney and $690k).

What New Players can learn from Kovalchuk
Obviously Oleksii Kovalchuk isn’t a brand new player since he’d had some success prior to the Event #42 win. But the fact remains that he won a major tournament in a game he was totally inexperienced in, which begs the question: can novice online poker players can pull off similar feats?

The truth is that due to variance in poker tournaments, a beginning player can still win lots of money, which is definitely one of the game’s biggest draws. Of course, players should learn as much poker strategy as they can too because this improves their chances of winning in tournaments.