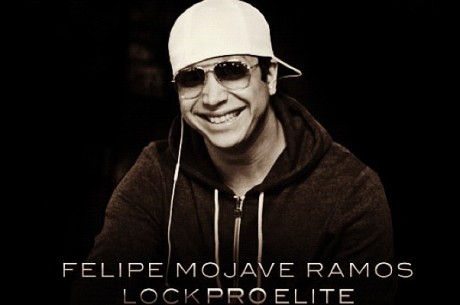 Noted Brazilian poker pro Felipe Tavares Ramos just took a big step in his career after joining the Lock Poker Pro Elite team. Ramos is no doubt one of the most talented online poker players in Brazil since he’s earned over $2.5 million grinding under the screen name “mojave14.” In addition to this, the Sao Paulo native has a solid live tournament resume that includes the following finishes:

Based on these cashes and others, Ramos has managed to accumulate $584,177 in live poker tournament winnings, which ranks him fourth all-time among Brazilians. But as alluded to before, mojave14 does the bulk of his playing online, and he’ll no doubt be loving the rakeback at his new home. Before we go on, it’s worth mentioning that you too can get a 36% Lock Poker rakeback deal by signing up through RakeTheRake; this also entitles you to a massive 200% up to $2,000 sign-up bonus.

Getting back to Ramos, he was ecstatic after signing the deal with Lock, saying: “I am truly looking forward to representing Lock Poker and honor our brand in Brazil, South America and around the world.” Lock CEO Jennifer Larson also commented on the signing, saying: “He is going to take Lock into a whole new world as we move to dominate the South American market. With Felipe and the Lock Pro army of brilliant minds beside us, we will succeed.”

This poker site has plenty of confidence in mojave14 since he’s somewhat of a poker ambassador in Brazil. They also have plenty of other noteworthy pros that are sure to catch the eye of the South American market such as Annette Obrestad, Chris Moorman, Eric Lynch, Leo Margets, Matt Stout and Melanie Weisner.

Out of these pros, Moorman and Obrestad are especially well known for their poker exploits. The UK’s Moorman has earned an incredible $7.5 million in online poker tournaments along with $2.66 million in live tourneys. Obrestad started playing online poker at age 15 and grinded her way to an impressive bankroll without ever depositing. Her career highlight involves winning the 2007 WSOPE Main Event along with £1,000,000.