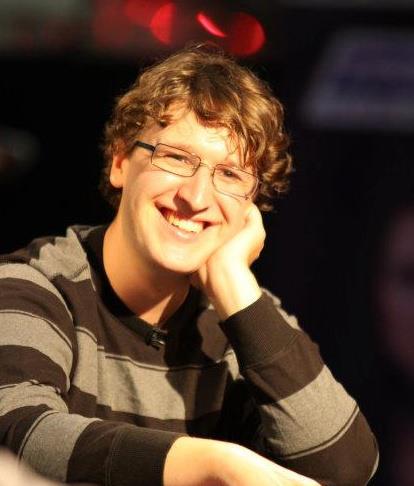 RakeTheRake caught up with one of UK poker's rising stars Max Silver for an interview. Read all about his poker tips and advice, history with video games, and his recent passion for cooking and kitchen gadgetry!

1. How did you start playing poker?
I was taught Texas Hold'em by my grandfather when I was around 15, the game quickly became popular with my friends and we started to have a frequent home cash game with a £5 buy in; I was never very good and a small loser in the game. Over time the game fell apart as friends moved on and my immediate interest in poker waned.

Right before my 18th birthday one of my gaming friends, Louis “Red” Nyberg, was telling me about his successes in poker. This inspired me to give it another go, so at midnight on the night when I turned 18 I deposited 50 dollars on party poker. I quickly lost this due to a combination of poor bankroll management and having no idea what I was doing but despite the loss I was fascinated.

A few more deposits came and went over the next few months and I started to do some work away from the tables as well as on the tables. Over time I turned into a small winner at the micro and low stakes and from there kept on playing, learning and enjoying poker. I’ve never had to deposit since!

2. Between live and online poker do you prefer one over the other and if so, why?
Variety is the spice of life and in poker, for me, it’s no different. Online offers me the chance to play my current favourite game, 6 max and heads up Pot Limit Omaha, whilst putting in significant volume. By playing multiple tables I can put in the same volume in a couple weeks online as I would get in a whole year playing live so that’s really great. Also the ability to go from 0 to playing 8 tables in 60 seconds then back to 0 in the same amount of time does wonders for my ability to have an overall awesome life. If I was playing live I’m locked up for the day whereas online I can change my plans to go out with friends or make dinner.

Live on the other hand has a lot of other benefits, I love being able to utilize the extra information live to find the optimal solution to every situation. I get to travel to unique and interesting locations and meet up with many friends I’ve made on the poker circuit as well as meeting new ones. I also have the opportunity to win life changing money at many of these tournaments.

3. What is your main poker ambition? Do you hope to bag yourself a WSOP Bracelet?
I think setting specific goals is a flawed concept, you only have control of so many variables when you play poker so I try to focus on the things I can control such as how well I’m playing, managing any tilt and making sure I still find poker fun.
These things all contribute to me hopefully playing poker for the foreseeable future so I’d say my main ambition is to keep putting myself in a position to achieve success.

4. In 2010 you finished 1st in the UKIPT Main Event in Dublin and in the EPT in London – do you think that these represent your most important poker moments to date?
These events were extremely important to me not only because they offered a huge confidence boost they also offered me a massive increase in bankroll. This bankroll boost allowed me to play more events at a bigger buy in size both improving my future earnings potential and my bankroll security.
However I think my most important poker moment so far was during the 2011 WSOPE where I came 8th in the WSOPE Main Event for 115,000 euros. This proved to myself that I could make in a huge run in a big buy-in event and I came within a flip of a much bigger payday with 1.4 million euros up top.

5. How much of your time do you spend playing poker, and for how long do you see it being a full-time career for you?
When I’m playing online I spend anywhere from between 15 and 35 hours a week playing, as well as other time spent talking poker with friends, studying strategy. When I’m playing live I can play up to 10 hours a day playing. (If I’m lucky as this usually means I’m making a deep run in a tournament!) So up to 50 hours a week. I think poker will be a career for me for at least the next couple years, beyond that I think I’d like to branch out and do something entrepreneurial with the money I’ve made.

6. As a newer, younger player – are you seeing the older pros having to change up their live games and adapt to compete with the younger generation’s new online-informed playing styles?
I think this varies wildly. Many of the “old school” generation refuse to change their game radically with the belief that the younger players are playing recklessly and that tight is correct. Others have gone full circle and completely adapted the “internet” style of play. I think both are flawed with the latter theory’s main issue being that these players simply not having put in the amount of hands and time to develop this style and understand why they are doing what they do as well as the implications of this to their overall game plan.
I think the real solution is somewhere in the middle and I think we’ve seen quite a few well known pros do this with great success. The player that immediately springs to mind is Neil Channing, I think he’s done an immense job of injecting some internet style aggression and creativity into his game in a lot of spots while retaining a great table presence and level of solidity to his game.

7. You’ve been actively involved with the online gaming community in the past. Could you tell us a little about the games you played and your professional involvement in online gaming?
I used to mainly play Counter Strike: Source, I played the game recreationally for a couple of years but never having any real success in any kind of professional capacity. It was around this time I became a volunteer writer for Cadred.org, a website covering news and articles from the professional gaming scene. Over time I moved up the ranks there until I eventually ended up as the editor in chief. After the buyout of the site by a large media company the site expanded and we went from strength to strength growing our audience reach and the scope of our coverage. In this job I had the pleasure to travel across Europe and America to many gaming events.

I was also the European content lead for the Championship Gaming Series, now defunct. This was really exciting as it was one of the first real attempts to take professional video gaming into the mainstream in America and Europe, unfortunately it failed but the experience was great.

8. Did your experience and interest in gaming lead you into poker or was it the other way around?
I wouldn’t say there was a huge correlation for me but talking to Louis “Red” Nyberg about poker got me interested in the game in the first place, he was one of the first gamers I’d talked to with real success making good money in the game.
If you look around there’s a history of successful video gamers becoming very successful poker players, you have Griffin “Shaguar” Benger and of course ElkY.

9. Do you miss the daily grind of competitive video game reporting, finding the stories and attending events and do you still keep in touch with people from the scene?
I don’t really miss the grind. I’ve moved on with my life and had other full time work which I found much more rewarding and educational after my gaming work which I miss far more. Towards the end of my work in gaming I think I had lost the passion for what I was doing and just ended up focusing more on quantity than quality. I’m hoping that doesn’t happen in poker.

I’ve stayed in touch with a few people but for the most part the majority of my gaming friendships have ended, I was actually pretty shocked that when you lose a big common interest a lot of the people you consider reasonably close friends don’t seem that close any more.

10. What do you think is the best way for someone to get into and learn to play poker?
There is a wealth of information out there now in books and online, I think one of the many video training sites is a great way to start and this should be supplemented with both participating in discussion, either with friends or on forums, and playing a lot. I maintain that a mistake you learn from isn’t really a mistake if you take a long term view to poker and I’ve made a lot of mistakes in my time but always come out the wiser after.

11. What’s the best poker tip you’ve ever been given or heard?
When I received coaching from Jason “JCarver” Somerville one of the most interesting lessons I received was when he asked me about a hand history and what I would do on every single street. He then asked me why and I couldn’t really come up with an answer. I was just making plays either because I’d seen them from other good players or learned from positive reinforcement that this play made me money. While this works fine in the short term if you don’t understand why you’re making a play the second you’re put outside of your comfort zone you’ll be lost. Learning the why of poker lets you create a framework in which to place any potential situation into and make the best decision.

12. How do you spend your time when you’re not playing poker?
Outside of the generic movies and music that I love I’ve really gotten into cooking over the last few years. I really enjoy making food for myself and other people and I love using kitchen gadgetry an unreasonable amount. My latest purchase has been a £500 Sous Vide Supreme which is basically a giant temperature controlled water bath. It’s great for cooking things that you don’t want to overcook, like fish such as salmon or steak.