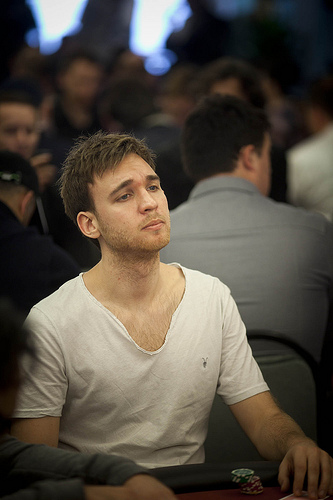 Londoner James Akenhead is looking strong at the 2012 English Poker Open. He took down a 29,800 pot against Ramey Shaio and became second on the feature table with 34,900 chips.

As for the hand details, Akenhead (AA) bet 2,450 on a flop of 6h-9s-Qh. Ramey called the raise and the turn was a 4c. After both players checked the turn, Akenhead went all-in when the river was a 5s. Ramey called the 5,625-chip difference, which gave James and his pocket rockets the hand. One more player we’d like to mention is Neil Channing, who’s just a little behind Quoss with 19,125 chips. Channing lost a 13,350 pot earlier in the day after wisely folding a set of 3’s when his opponent hit a heart flush on the turn.