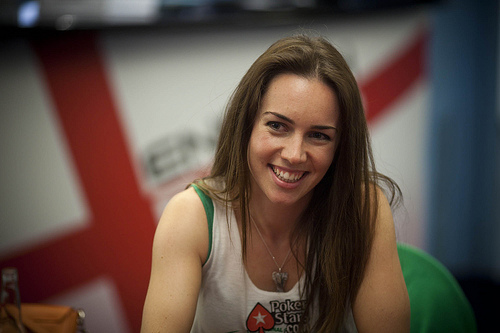 James Dempsey and Liv Boeree have certainly provided some excitement early on in Day 1B of the 2012 English Poker Open.

Beginning with Dempsey, he got involved in a large pot with “Pedram” while holding Kd-Jd on a flop of Jh-4h-Ts. The Brighton native bet 1,700 chips while Pedram (AA) called with the better pair. Following the turn card of 2s, Dempsey kept the aggression up when he bet another 2,700, which Pedram once again called.

As for Liv Boeree, she unfortunately lost a 10k pot heading into the second break, which left her stack at a manageable 16,775 chips. She’s remained steady after losing the big hand thanks to some very nice plays. While holding pocket kings on a board of 9-7-6 rainbow, the 2010 EPT San Remo champion led out with a 1,950 bet. However, her opponent bet 3,000 chips while holding pocket 9’s. Realizing that she was beat, Boeree mucked her pocket kings and avoided a massive chip loss.

During break, the British poker beauty joined the EPO announcers to talk about some of the notable hands she’s played. Boeree also briefly discussed a return to the science field since she’s got an astrophysics degree. Thankfully, it looks like we’ll be keeping this brainiac around the poker world for a while because she’s more than happy on the felt.