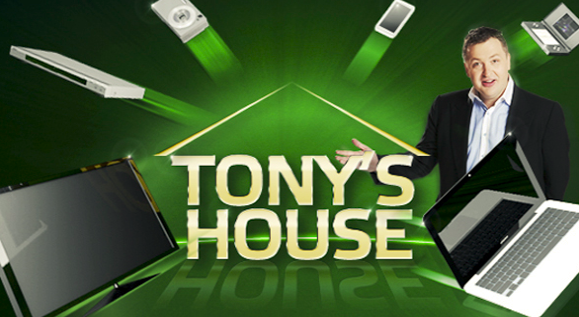 Throughout his career, Tony “G” Gouga has been one of the most outspoken and brash players in poker history. Some of his rants against fellow pros such as Ralph Perry and Dave “Devilfish” Ullliot have earned Tony G plenty of infamy. This being said, most poker players will have few qualms about plundering Gouga’s house for $200,000 worth of iPhones, MacBooks, Amazon Kindle’s and more.

Luckily, you don’t have to worry about catching a felony burglary charge while raiding Tony’s house because Party Poker are handing out the prizes. Assuming you want to get started on your way towards winning some fantastic rewards, here’s a closer look at the “Tony’s House” promotion.

Overview
Tony’s House runs from now until October 7th, 2012 and there’ll be a number of prizes handed out in both daily and weekly giveaway tournaments. The prize distribution breakdown is as follows:

Prizes
Each daily, weekly and Grand Final tournament gives away 50 prizes. Below you can see the top 10 rewards for each tournament.