Uncle Broomcorn’s Odd Edge: News from the Fringes of Normality No. 3 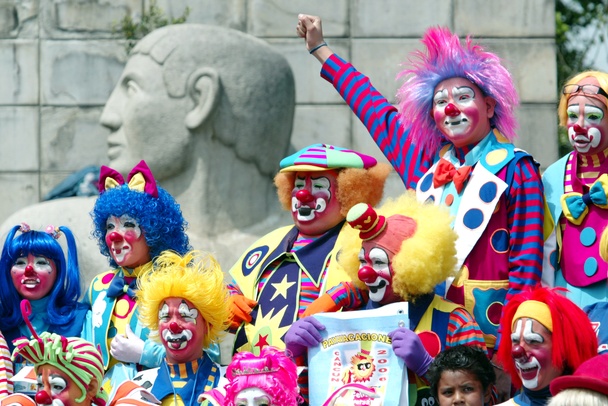 Make ‘em Laugh - 800 Clowns Gather to Laugh for Peace
In Mexico City recently, hundreds clowns gathered at the Mother Monument to laugh for a full 15 minutes as a political statement for peace. The thinking behind the mass chuckle is that more time spent laughing leaves less time for violence.

The gathering was all part of the 17th International Clown Convention (yes, that is a real thing), and Llantom, Chairman of the Mexico Clown Association, made the following statement about the 15-minute-long laugh:

"We held 'laugh for peace' to speak out against violent conflicts, especially the internal conflicts in Mexico. We don't want violence, and we hope we can make more people love peace and learn to smile more often".

Well, hear bloody hear say we. Or should that be hee-hee?

Monkey Captured After 3 Years on the Loose
Earlier this week a male rhesus macaque monkey that has been roaming free round the state of Florida for the past 3 years was finally caught. The search for the monkey picked up steam over the last fortnight following a brief attack on a Floridian woman.

Wildlife Rescue and Rehabilitation worker Vernon Yates gave a short emotional interview, in which he expressed relief that the monkey had finally been captured. Yates received death threats for his part in trying to catch the loose macaque, but said he simply feared that, roaming loose, the monkey would be killed. Yates is not happy that the monkey will now remain in captivity rather than it’s natural environment, but insists that a life in proper and appropriate captivity in a zoo or wildlife park is obviously far better for both animal and people than having it running loose round Florida.

Dr. Don Woodman of the Animal Hospital of Northwood spotted the rhesus macaque in a tree and was able to use a dart pistol to subdue the monkey for capture. It was then taken to Northwood to be screened for viruses before it is sent to live in captivity.

Modern Man Versus Neanderthal: Place Your Bets!
Paleoanthropologists, Archaeologists, and Paleoartists (and presumably some other occupations from the ‘hardest-to-spell job titles’ category at the International Really Difficult Spelling Competition) have recently made headway in building a more accurate Neanderthal construction thanks to the study of a nearly complete skeleton found in France over a century ago! This new ground means we can now answer that extremely important question: Who would win in a bout of fisticuffs – Neanderthal or Homo sapiens?

Well! Neanderthals essentially would’ve been fairly short beefcakes – very muscular and with a low centre of gravity, making them pretty unmovable. Plenty of carcass dragging and mammoth-wrestling would’ve made for physically strong, hardy opponents. However, Homo sapiens would have the reach advantage, meaning modern man could potentially just grab the head of Neanderthal and hold him at bay while he swung furiously like a frustrated child at the space between. Homo Sapiens would also have the advantage of larger brains, meaning wits might win over any superior physical strength.

Of course much of this is speculation, so if you’d like to answer the question yourself then find your shortest, most muscular friend and get them drunk enough to sufficiently compromise their cognitive functions, then have at it. Please feel free to get in touch with RakeTheRake to tell us who the victor is.