Conquer the World and win $100k at Party Poker 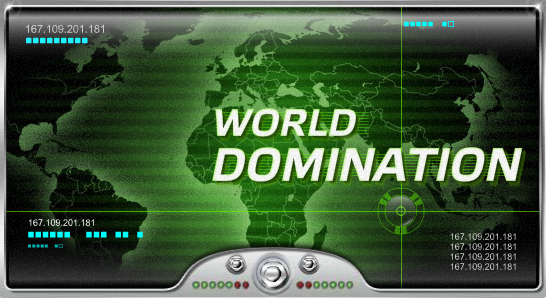 If you thought world domination was just for some eye patch-wearing villain in a James Bond movie, think again! Party Poker are running a “World Domination” promotion from now (February 1st) until March 1st, 2013. Anybody who can take over the world will be $100,000 richer, and there are tons of smaller prizes too. That said, here’s a look at what you need to know to earn a big payout in World Domination.

How to Win...
Every time you collect at least 10 Party Points in February, you’ll randomly conquer one of 64 available cities. Some of the cities feature cash prizes, while others carry a freeroll ticket. For example, if you take over Paris, you’ll get a $20 cash payout; conquering Montreal would earn you a $10,000 freeroll seat.

There are four cities in each country, and once you take over all of them, you’ll also be awarded the country and its prize. So if you won London, Manchester, Liverpool and Nottingham, you’d dominate England and receive a $300 prize.

Every continent has four countries that you must overrun, and doing so leads to even bigger payouts. For instance, overtaking England, France, Germany and Russia would give you Europe, which is worth $7,000.

Cash Prizes
There are dozens of different prizes that you can earn in World Domination, which means you don’t have to complete all 64 cities just to win big. Below you can see each prize that’s available:

Information on Freerolls
In regard to the free tournaments, please note that you only get the highest earned freeroll ticket. However, you do receive 5 Party Points for every unused freeroll ticket that you’ve unlocked along the way. For instance, if you collected four freeroll seats, you’d get 15 Party Points for the tickets that weren’t used. Here’s a list of each free tournament along with start times and dates: