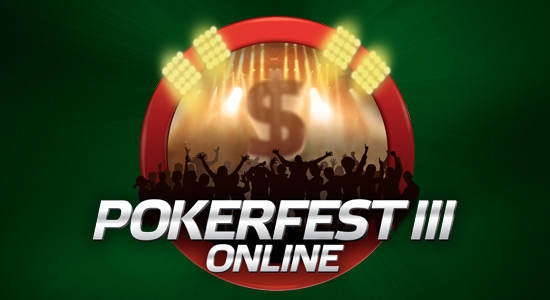 In just a few weeks, Party Poker are bringing back their flagship tournament series, Pokerfest III. This event will run from April 21st-May 5th and offer $4 million in guaranteed money. And the highlight of Pokerfest III will no doubt be the Main Event, which is going to offer $1.5 million guaranteed!

This series will feature 64 tournaments in all, with 4-6 tourneys running every day. We’ll refrain from releasing the entire schedule here because that’d get pretty lengthy. However, you can see the bigger Pokerfest III tournaments below (all times CET):


Do note that these are only the largest tourneys, and there are plenty of other events where buy-ins go as low as $0.50. Assuming you’ve got your eye on the big tournaments, yet don’t have enough for the buy-ins, there are plenty of ways to win seats. That said, let’s cover the satellites and Pokerfest III giveaways.

Pokerfest III Satellites
There’ll be dozens of daily satellites running for this event up until May 5th. Some of the satellites are as cheap as $0.50 while there are also freerolls too. Keep in mind that the satellites change on a daily basis, so you’ll need to visit Party and look in their tournaments section for times and dates. Also note that there’ll be both a $5,000 and $10,000 Pokerfest Mega Satellite, where tons of tickets are going to be given out.

Pokerfest Daily Prize Card
From now until Pokerfest III is over, there’s a Daily Prize Card promotion taking place. All you need to do is earn one Party Point in a day and you’ll receive a prize card. If you’re lucky, the card might even contain a free tournament seat!