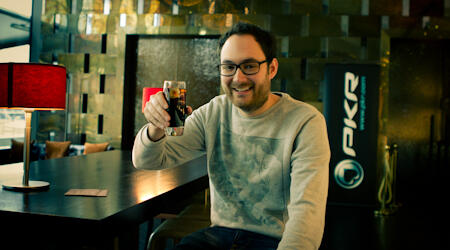 The revolutionary 3D poker room PKR has just added UK cash game specialist Simon ‘Rhymenoceros’ Hemsworth to their growing team. Hemsworth has been one of the top ring game players at PKR for years, so it’s only fitting that he signed with his favorite room.

The 29-year-old often plays mid to high stakes cash games at PKR and especially has an affinity for $5/$10 6-max NL Hold’em. Hemsworth also plays live poker tournaments, although his winnings pale in comparison to his cash game profits. The Londoner has earned $23,791 in live tourneys since 2010, which he hopes to increase as a sponsored pro. He stated the following:

"As a Team Pro I want to help represent a brand I have had great affection for over the last few years. I have played almost exclusively on PKR for a long time now and made some great friends here. One of my main aims while working with PKR is to improve my live tournament record, so let’s hope for deep runs in the near future."
PKR’s Head of Public Relations, Dan Grant, also discussed the deal by saying, “Simon has been one of the brightest online stars at PKR over the last few years and we know he has what it takes to make his mark in the live arena.” Grant added, “More importantly, he’s a fantastic bloke with a great work ethic, and a great example to others who want to achieve success in poker.”

The other players whom Hemsworth will be joining on Team PKR include Vladimir Geshkenbein, Scott Shelley, Sofia Lovgren and Marc Barille - you can read about all four team PKR poker players here. Geshkenbein definitely stands out in this group because he won the 2011 EPT Snowfest Main Event ($552,901) and the 2009 APPT Macau Main Event ($266,705). Shelley also gained considerable poker fame for winning a 2010 WSOPE £1,000 NL Hold’em tournament ($206,499).

It’ll be interesting to see if Hemsworth can experience similar live tournament success as the newest member of Team PKR.