What does the Ronaldo PokerStars Signing mean for Poker? 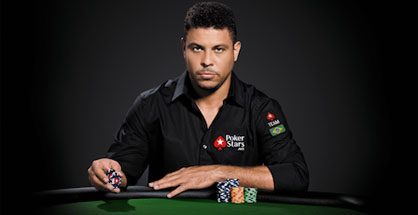 Ronaldo is widely regarded as the greatest striker ever since he holds the World Cup record for goals with 15. He also helped Brazil win World Cup titles in 1994 and 2002 and was named the FIFA Player of the Year three times. Unfortunately, he was forced to retire from football in 2011 due to various injuries that he'd accumulated over the years. But Ronaldo is still a living legend and very famous throughout the sports world.

Due to his fame in Brazil and beyond, the 36-year-old could definitely be instrumental in bringing more players to online poker. Obviously this is what Stars is banking on after signing Ronaldo to a contact. But the deal should have much larger implications for the poker community abroad.

Just looking at Ronaldo's home country of Brazil, this nation is said to have one of the fastest rising poker communities anywhere – despite the national government looking down on the game. Seeing as how Brazil is the world's fifth largest country with 193,946,886 people, it would definitely be great if Ronaldo can inspire at least a small portion of these residents to play poker. Going further, he should have quite an appeal to South America as a whole, which boasts 387,489,196 people.

Another thing worth mentioning in this matter is how Ronaldo actually plays poker on a regular basis. He's been spotted in various cardrooms and casinos throughout South America and has discussed the game on talk shows. Ronaldo is also expected to participate in the Brazilian Series of Poker along with other live tournaments in his home country.

Compared to Nadal, Moreira de Melo, Becker and Hellner, Ronaldo seems like he'll be spending a lot more time in the poker world. And this extra time should definitely help attract some of his fans to online poker.