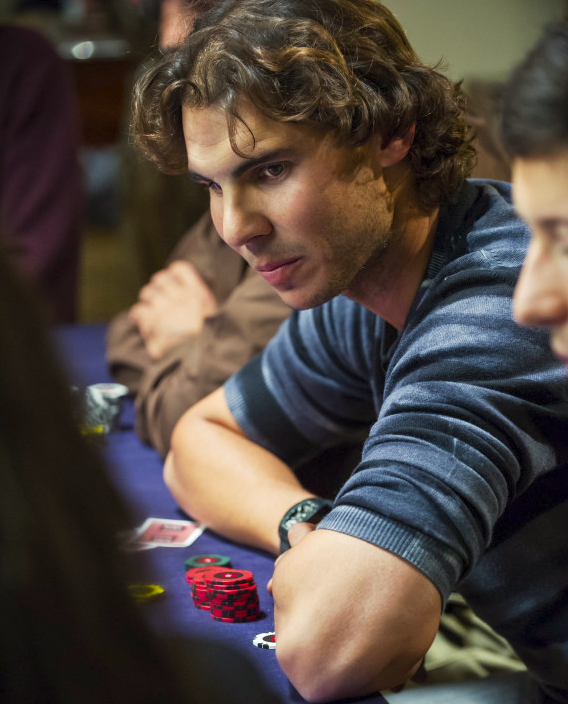 Despite being in hot pursuit of his fourth straight French Open title, tennis star Rafael Nadal recently took some time to play in a poker tournament at Roland Garros. And this wasn’t just any tournament, but rather an online poker event held in a live setting.

200 fans gathered on one of the French Open clay courts to meet Nadal and play in the tourney. Players used smartphones and tablets to compete against each other in the PokerStars-sponsored event.

Nadal had a pretty solid showing in the tournament since he outlasted half of the field and even busted Team PokerStars Pro Julien Brecard. Unfortunately, ‘The King of Clay’ wouldn’t be celebrating for long because he fell after his K-Q combo was out-flopped by an opponent’s J-6. But while he may have busted out without cashing, Nadal can at least be happy that he had the better hand.

Rafa was in pretty good spirits after being eliminated and signed chip sets for the top 20 finishers. He also took time to speak with PokerStars about the event. “We are here doing a great event for PokerStars. I’m having some fun with some friends here, very good fun,” he said.

Nadal went on to talk about how Roland Garros is a special place to him, and this year will especially be significant because he’s coming off of a major injury. Rafa spent seven months out of tennis with a knee injury and returned in March to compete at the 2013 Monte-Carlo Rolex Masters. Following a runner-up finish here, he won the 2013 Barcelona Open Banco Sabadell. And now, with the world’s number four ranking, he looks poised to continue his stellar tennis career.

As for his poker skills, Nadal isn’t quite at the level he is in tennis. However, the seven-time French Open champion is improving and even won a €10 buy-in PokerStars tournament. He collected €152.40 for the victory, which pales in comparison to his $50 million in tennis winnings. But it’s still a big win for Nadal since he’s in the process of learning poker strategy.