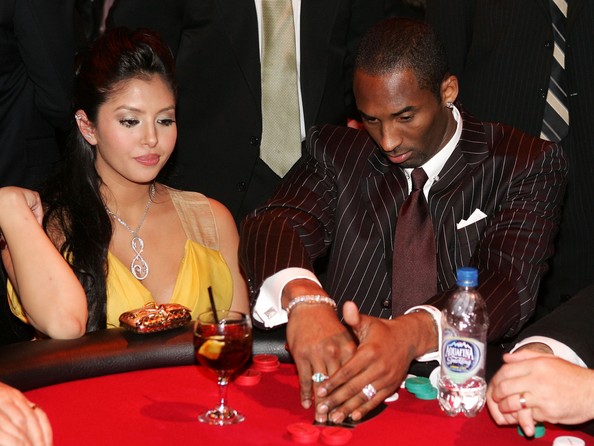 After the first 16 tournaments, the 2013 World Series of Poker was starting to look more like the North American Series of Poker. By this point, Americans had won 11 gold bracelets while Canadians captured the other 5 bracelets. However, this monopoly was finally broken up when Greece’s Athanasios Polychronopoulos won Event #17 and set a record in the process. Check out what record he set below along with other stories like Taylor Paur winning a very strange heads-up match, and NBA star Kobe Bryant addressing the 2013 WSOP crowd.

Europe strikes with Wins by Polychronopoulos and Kitai
Regardless of how good you are, it’s very difficult to win two huge tournaments at the WSOP. Not only are there lots of skilled pros, but you also have to worry about the luck associated with navigating through 2,000 or more players. Perhaps you should consider Athanasios Polychronopoulos lucky/good since he became the first player to win two World Series events with “large” field sizes and buy-ins of $1,500 or less. He beat a 2,105-player field in this year’s Event #17 $1,500 NL Hold’em tournament ($518,755). The Greek also won a $1,500 buy-in NL Hold’em tourney along with $650,223 at the 2011 WSOP.

Polychronopoulos’ bracelet wasn’t the only recent victory for Europeans since Belgium’s David Kitai tasted World Series gold too. The 33-year-old outlasted a 195-player field in the Event #19 $5,000 Pot-Limit Omaha tournament. After surviving a final table that included Dario Minieri (8th, $26,468), Bertrand Grospellier (7th, $34,341) and Eugene Katchalov (5th, $58,912), he earned a $224,560 payout. Kitai is best known for being one of poker’s few “triple crown” winners since he’s captured EPT, WPT and WSOP titles.

Taylor Paur wins Weird Heads-up Match
Relief was a good way to describe Taylor Paur’s victory in the Event #18 $1,000 NL Hold’em tournament. He played well enough throughout the tourney to carry a 4-to-1 chip advantage into a heads-up showdown with amateur player Roy Weiss.

After a slow start to their match, Weiss began shoving his chip stack into the middle on every single hand. This forced Paur to make very difficult decisions and helped Weiss gain the lead at one point. Weiss’ biggest mistake was continuing to shove every time, even after he had the lead. Paur regained his composure and was able to finally defeat Weiss and win the $340,260 top prize.

Kobe Bryant pays Tribute to Jerry Buss, addresses Seven Card Stud Field
Los Angeles Lakers owner Jerry Buss was an avid poker player, having made multiple appearances at the World Series. He even managed to finish third in a 2011 WSOP $2,500 Seven Card Stud event. So when Buss passed away earlier this year, he was mourned by both the basketball and poker communities.

In a way, Lakers star Kobe Bryant blended the two worlds together by addressing the Event #23 Seven Card Stud field. “Doctor Buss always enjoyed going to the World Series of Poker and matching wits with the poker sharks,” said Bryant. “I miss him, we all miss him. So tonight, let’s honor the late, the great Doctor Jerry Buss. Players – shuffle up and deal.”