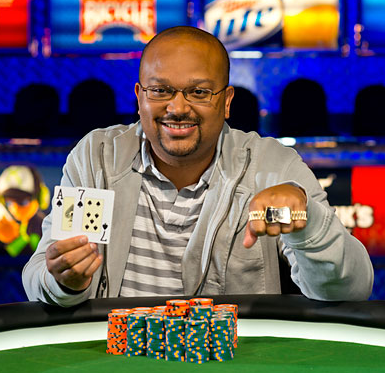 One great thing about the World Series of Poker is that it gives every player an opportunity to win big, regardless of their experience or past success. Perhaps nobody exemplifies this better than Ken Lind, who recently won the 2013 WSOP Event #26 Seniors NL Hold’em Championship along with $634,800. What’s amazing about Lind is that he’d never even played in a WSOP tourney before. However, a friend convinced him to try the Seniors Hold’em Championship and Lind took his advice.

Winning this tournament certainly wasn’t an easy task though. After all, Lind was facing a field of 4,407 players, which was the biggest field ever in the Seniors Championship. Nevertheless, he had the right combination of luck and poker skills to take this event down along with the $634.8k top payout. Now here’s a look at what else has recently happened in the 2013 WSOP.

It’d been eight years since David Chiu won his fourth gold bracelet. That said, he was happy to end this drought by capturing a fifth bracelet with a win in the Event #23 $2,500 Seven Card Stud tournament. Chiu beat out some excellent players on his way to the $145,520 top prize, including Krank Kassela (5th), Michael “The Grinder” Mirzrachi (4th) and Scott Seiver (2nd).

Thanks to his fifth bracelet, Chiu joins 10 other players who are all tied for 12th on the all-time bracelet winners list. One more thing worth mentioning here is that the Event #23 Seven Card Stud tourney honored the late Dr. Jerry Buss. The L.A. Lakers NBA franchise owner took third in the 1991 $2,500 Seven Card Stud event, which is why he was honored in this year’s tournament after passing away. Pathology professor Corey Harrison is used to giving lessons at the University of Alabama at Birmingham. However, he was giving his lessons on the felt in the Event #24 $1,500 NL Hold’em tournament. He played through a field of 1,731 players and on to the $432,411 first place payout.

What’s interesting about Harrison is that he only had a few small WSOP cashes prior to this big win. Now he’ll be able to return to UAB with a gold bracelet and plenty of stories to tell his students.