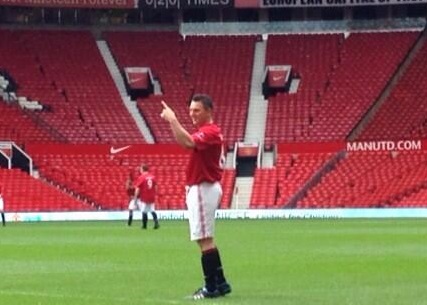 Most people know Sam Trickett as the poker star who’s made tens of millions of dollars in cash games and tournaments. But he was once a pretty good football (that's soccer to you Americans) player too and actually played semi-professionally. A knee injury in 2005 forced Trickett to retire from the game, at which point he found poker.

Obviously poker is his main pursuit now, but the Brit is still a huge football fan. And he was recently treated to the ultimate fan experience after getting to don a Manchester United shirt and play at the Old Trafford. An elated Trickett sent out the following tweets about his dream experience:

Playing on Old Trafford today.Cant remember being this excited about anything.Small chance I’ll be in the hospital later with a bad knee

Trickett’s fiancé, Natasha Sandhu, would later tweet that he scored the first and third goal in the friendly match. Not bad for a guy who hasn’t played any serious football in eight years!
With his Manchester United dream now completed, Trickett can get back to the poker tables and prepare for the 2013 WSOP. Last year was especially sweet for the 25-year-old since he finished second in the $1 million buy-in Big One for One Drop tournament and earned $10,112,001.

The tournament success hasn’t stopped for Trickett as he took seventh in the 2012 Macau High Stakes Challenge Super High Roller ($999,184), won the 2013 Aussie Millions $250k Challenge ($2,111,397) and finished second in the Party Poker Premier League IV event ($254,000). Thanks to these massive cashes and others, the Nottingham native has earned $19,839,142 in live poker tournaments. This ranks second all-time behind only Antonio Esfandiari, who won the 2012 Big One for One Drop.

One more thing worth mentioning about Trickett is that he’s also an incredible cash game player. He has made millions of dollars in live ring games while facing off against top-notch competition. If you want more info on Sam Trickett then check out RakeTheRake's Player Profiles page.