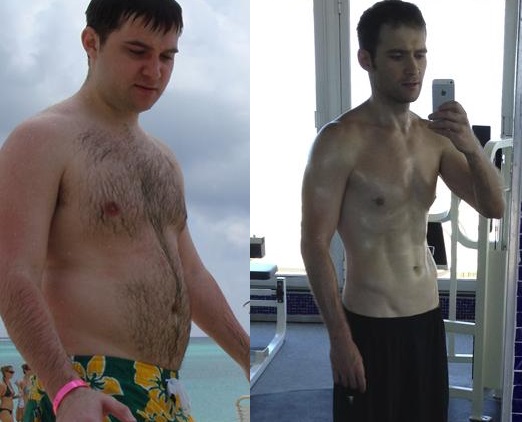 Eugene Katchalov leads a very busy life. The Team PokerStars pro grinds for around 12 hours a day and travels the world playing in major tournaments. With such a hectic schedule and little time to work out, it's no wonder why he’s gradually gained weight throughout his decade-long poker career.

Of course, it didn’t help that Katchalov used little discretion in what he ate. “I think food made me happy, and that kind of resulted in me starting to gain weight after my teens,” he told MensFitness. Katchalov explained how red meat, fried potatoes, buttery foods and white bread were staples of his former diet. All of this resulted in the poker pro topping out at a chubby 230 pounds.

In hopes of making the Ukrainian TV version of The Bachelor, Katchalov decided that a drastic body transformation was in order. “I realized it wasn’t going to look too good if I was overweight on the show, and I wanted to increase my chances.” Unfortunately, he didn’t get picked for The Bachelor, but Katchalov did complete an incredible body transformation that’s left him totally ripped.

Lifestyle Change
The first step to his dramatic weight loss involved adopting a diet rich in protein while avoiding carbs at night. Katchalov is no longer pigging out on starchy foods and watches his caloric intake. However, the Ukrainian grinder is allowed one cheat meal a week. “It’s helped me to actually really appreciate those foods and I find myself waiting for these cheat days,” he said.

Of course, exercise has been a big part of Katchalov’s new lifestyle too. He works out six times a week, sometimes going as long as two hours per session. The 31-year-old does everything from cardio to lifting and makes sure to work out each muscle group throughout the week. Katchalov also makes prop bets with fellow Team PokerStars members on his fitness routine.

The End Result
After 14 months of working out and eating right, Katchalov was able to drop 63 pounds. He’s since packed on muscle over the past three months, and his new dimensions are a chiseled 6’1”, 180 pounds. When speaking of his new routine, Katchalov said, “You can fall in love with it.”

What’s really interesting is that he believes his improved body and health have had a positive impact at the poker tables. “I feel like I have much more concentration, much more energy, and I just feel healthier and more mentally aware.” Eugene Katchalov already has $7,399,351 in poker tournament winnings, so it’s scary to think what an improved, more focused version of him will do!