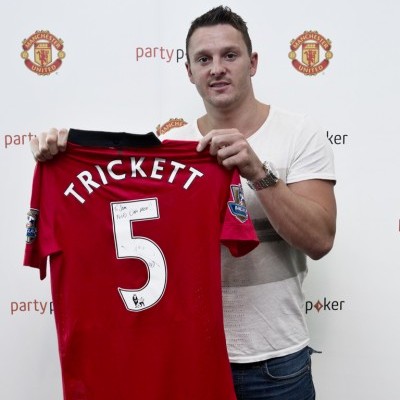 Sam Trickett is used to playing in the world's biggest poker tournaments, including the $1 million buy-in Big One for One Drop last year. But recently, Trickett found a £250 buy-in tourney that he just couldn't resist.

The Brit played in the Road to Old Trafford event, which was held at Manchester United's legendary stadium. He was pitted against 168 other players, including UK football legends Quinton Fortune, Bryan Robson, Norman Whiteside and Dwight Yorke.

With a number of footballers and amateurs involved, it's not a huge surprise that Sam Trickett emerged victorious. The 27-year-old's prize was £10,000, which is quite small by his standards. After all, he collected $10.1 million for finishing second in the aforementioned One Drop tourney.

However, this tourney was about far more than just the money since Trickett was a semi-professional footballer before two knee injuries forced him to quit. So he was extra motivated to win the Old Trafford tourney. "I am really happy to win this event," he said. "I played for fun, but I felt I really had to win at Old Trafford. I made it my mission!”

Following the victory, Trickett donated his winnings to the 'Live the Dream Foundation.' This charitable organization is run by Manchester United centre-back Ferdinand Rio. The British football legend couldn't play in the poker tournament himself because Man U had a match that day. However, he did managed to sign some jerseys for those who made the final table. Speaking of the final table members, you can see their results below:

For more info on Sam Trickett, including stats and a bio, check out his profile on RakeTheRake's Pro Poker Players Profiles page.