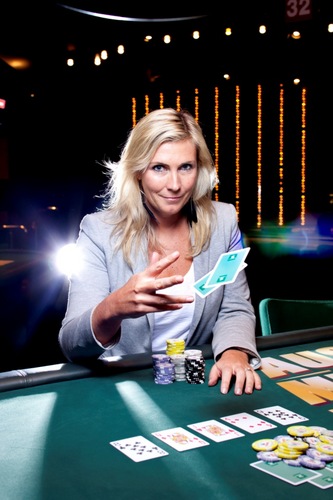 Over the past year, 888poker have moved their way into the top three online poker sites in terms of traffic. That said, 888 have worked hard to sponsor some of the world's most talented poker pros to represent them. And these efforts are definitely paying off at the 2013 WSOP Europe, where 888-sponsored players captured the first two titles. As you'll see below, one of these victories even made history.

Jackie Glazier wins WSOPE €1,100 Ladies Hold’em
For the first time ever, European World Series organizers held a tournament that was specifically dedicated to women. The first-ever €1,100 Ladies Hold’em event drew 65 players, and this field would quickly be whittled down to eight survivors after the first day. Jackie Glazier emerged as the chip leader going into the final table, and she increased this lead thanks to some stellar play.

About the only time when the Aussie was really threatened was during her heads-up match with Maryline Valente. The latter took the chip lead from Glazier at one point. But this wouldn't last long because Glazier quickly reclaimed the lead and put Valente on the ropes. With her stack dwindling, Valente went all-in with pocket 6's, while Glazier called her with pocket jacks. The board was A-Q-4-5-7, which gave Glazier her first WSOP gold bracelet and improved her lifetime tournament winnings to $1,188,451. Below you can see the final table results of this tourney:

Henrik Johansson takes down €1,100 No-Limit Hold’em Re-entry
Event #2 of the WSOP Europe featured a fairly big field as 659 players entered this tournament. Little-known Henrik Johansson was one of nine players who battled through this large field and onto the final table. Here is where the Swede truly excelled as he eliminated four players before meeting France's Adriano Torre-Grossa heads-up.

Johansson carried a moderate chip lead into this matchup, but Torre-Grossa played hard to win a bracelet for the host country. However, it wasn't enough as the Frenchman shoved with 7-6 on a T-9-7 flop, only to be called by the Swede and his T-9 combo. When the turn and river both produced aces, Johansson began celebrating his first major tournament score and WSOP bracelet.

888 Senior Vice President Itai Pazner was extremely pleased about Glazier and Johansson's victories. "It's always exciting to see one of our loyal customers do so well. This year's WSOPE is starting out with a bang, and with such a talented and large team on the ground I think we could see a few more bracelets in this year’s series." Pazner added, "Enjoy Henrik, I hope our team helps you celebrate!"