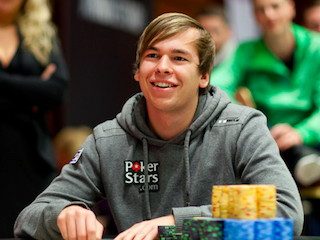 It appears as if this was the beginning of a trend that was recently highlighted by Martin Finger's victory in the 2013 EPT London Super High Roller. It was almost like deja vu from the WCOOP because Germans took the top three spots in addition to fifth place. The only non-German to finish within the top five was American hedge fund manager Bill Perkins, who collected a £290,100 payout.

After the elimination of Christoph Vogelsang in third place (€383,200), Tobias Reinkemeier and Finger battled heads-up to see who'd be crowned the champ. The latter held a big chip lead, but Reinkenmeier would make it a contest as they played for over two hours. This see-saw match finally came to a conclusion when Reinkenmeier five-bet all-in with pocket 8's, only to be called by Finger and his pocket jacks. Reinkenmeier couldn't get a third eight to make his set, and he settled for the €593,900 payout.

For Finger, this is his second major EPT title since he won the 2011 EPT Prague Main Event (€720,000). But the London High Roller victory may be the sweetest win because of the competition that he faced.

"I just tried to play my best poker and keep going on like the first two days," he said. "I thought I had a pretty good chance to win and finally I did - it feels awesome. The field of a Super High Roller is so tough, tough to beat all of them in one tournament."