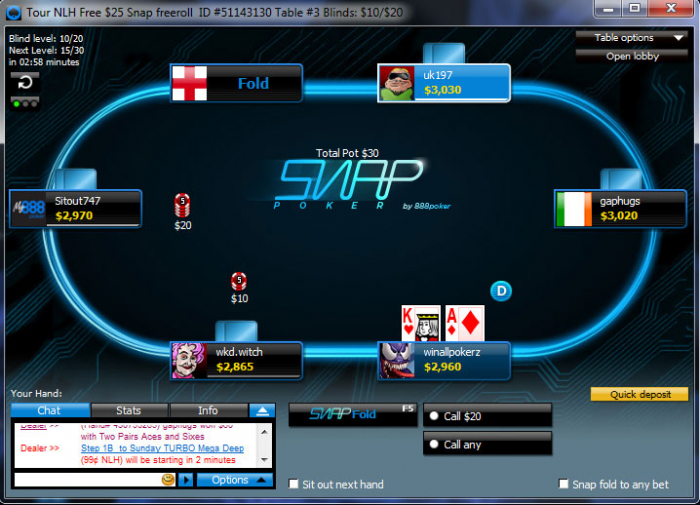 888poker have been a little late getting to the fast-fold party, but it looks like they've finally arrived. 888 confirmed that they've moved their new 'Snap Poker' product out of beta testing and made it available to "some" players.

As with any other fast-fold poker variation, Snap speeds up cash game play by moving players to a different table with new cards whenever they fold a hand. This means that people don't have to wait on their opponents to act, which subsequently allows them to play far more hands per hour.

What's really nice about Snap Poker and other fast-fold variations today is that players don't even have to wait for their turn. Instead, they can click the 'fast fold' button immediately after seeing poor cards and be taken to a new table.

Seeing as how many recreational players get bored with waiting on opponents, fast poker variations have quickly risen in popularity. Most major online poker operations have already introduced their own fast-fold products, including PokerStars, iPoker, Full Tilt, Party Poker and Bodog.

Interestingly enough, 888 are actually the last major online poker entity to roll out a fast variant, which is strange given their huge player traffic rise this year. 888 began 2013 as the fifth largest poker operation, but have moved ahead of both Party Poker and Full Tilt to third overall. Major reasons for 888's big traffic increase include their push into legalized markets, inventive promotions, strong commitment to customer service, and growing number of sponsored players.