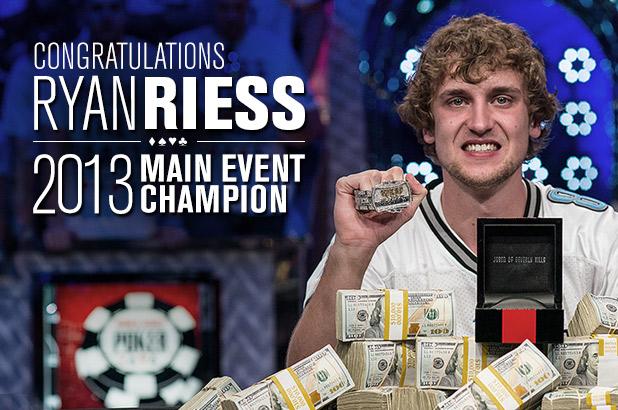 Many 14-year-old's dream of becoming professional athletes or doctors. But at this young age, Ryan Riess had a much different goal: win the WSOP Main Event. "I've been dreaming about it for a long time, ever since I was 14 and saw (Chris) Moneymaker win it," Riess said. And he was finally able to realize this dream after beating Jay Farber heads-up to win the 2013 WSOP Main Event along with $8,361,570.

Few people would've tabbed Riess to be the Main Event champ when the final table was formed back in July. Sure, the recent Michigan State graduate has been a professional for about a year and was fifth in chips out of the remaining nine players. But much of the attention was on JC Tran and Amir Lehavot since they were first and second in chips, respectively, and had more impressive tournament results.

Nevertheless, it was Riess navigating his way through the first night of the ME final table and into a heads-up match with Jay Farber. The latter was an even more unlikely story than Riess since he works as a Las Vegas nightclub promoter and plays poker in his free time. Farber was hoping to become the first amateur to win the Main Event since Jerry Yang did it in 2007. And things were definitely looking good for Farber too since he had 105 million chips to Riess' 85 million going into their heads-up match.

But just over 20 hands into play, Riess was able to grab the lead. From here, he would stay in the driver's seat, though Farber definitely made it a contest. At one point, Farber doubled up and cut into Riess' lead. But in the end, a short-stacked Farber resorted to shoving his last 12 million chips in with Q-5(s). Riess called and flipped over A-K(s), and the board of J-10-4-3-4 sealed his win.

At just 23 years old, Riess becomes one of the youngest Main Event champions in history. He also follows in the footsteps of the man who inspired him in the first place, Chris Moneymaker.