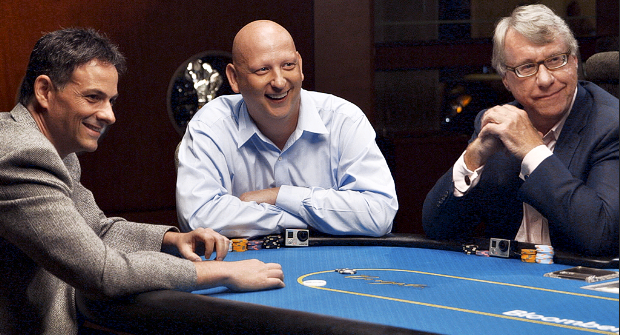 Over the years, we've seen plenty of poker TV shows that feature famous pros grinding on the felt. So Bloomberg TV decided to take a different route with their new poker show: get six highly successful Wall Street investors together in a $50,000 buy-in, 6-max sit and go.

Despite both Einhorn and Perkins being in the mix, Steve Kuhn emerged victorious on the first episode of Poker Night on Wall Street. He seemed to be the third most knowledgeable player, behind the previously discussed duo. And Kuhn's skill showed as he marched towards the top prize - $300,000 that he gets to donate to the charity of his choice. When asked if he'd consider playing poker full-time after this victory, he quipped, "I kinda like my job already."

As for the other three players, Chanos, Gabelli and Rogers, they are certainly better at their day job. However, all three players are learning fast and could eventually compete with the defending champ Kuhn, as well as Perkins and Einhorn.