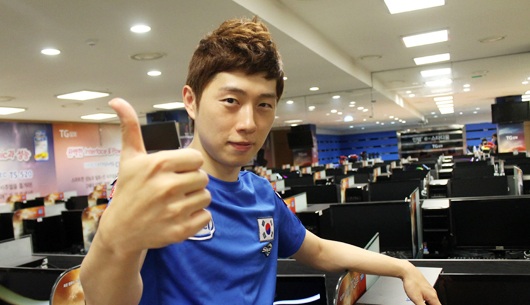 Lim Yo-Hwan has built an outstanding gaming career through StarCraft that includes fame and fortune. However, the man known as 'BoxeR' recently announced his decision to go from StarCraft to poker. Lim was forced to announce the career switch after he was introduced as a 'Professional Poker Player' on the South Korean reality show The Genius.

It appears that Lim's primary motivation for entering the poker world is that he's signed a deal with FulPotPoker, a free-play 3D poker room that's available to Facebook users. As a member of FulPotPoker, he'll start competing in Asian Poker Tour and World Series of Poker tournaments in 2014.

Besides the sponsorship deal, another motivator behind Lim moving to poker is the physical pain that he's experienced from a lifetime of video games. Last year, the young South Korean began undergoing physical therapy for a myriad of problems. "The main problem is the spinal pain," he said. "There's an inflammation, and there is pain in my wrists, waist, neck, and everywhere." At one point, the pain had gotten so bad that Lim couldn't use his right hand (mouse hand) for extended periods of time.

Of course, poker is no picnic either when it comes to the pain that accompanies sedentary jobs. Some of the biggest poker tournaments require players to grind for 10 hours or more per day. But maybe the small differences between sitting and playing video games versus playing poker could help him.

Whenever Lim Yo-Hwan does take the felt, it'll definitely be an interesting occasion. Many people are already comparing him to Bertrand 'ElkY' Grospellier, who was also a top-ranked StarCraft player before entering the poker world. The Frenchman has earned $10,732,306 in live poker tournaments, which includes a 2008 PCA Main Event title ($2m), 2008 WPT Fiesta Al Lago title ($1.41m), 2011 WSOP Seven Card Stud Championship victory ($332k) and several major side event wins. Lim has a lot to live up to when it comes to Grospellier, but hopefully he can make fans forget about this and become his own type of player.