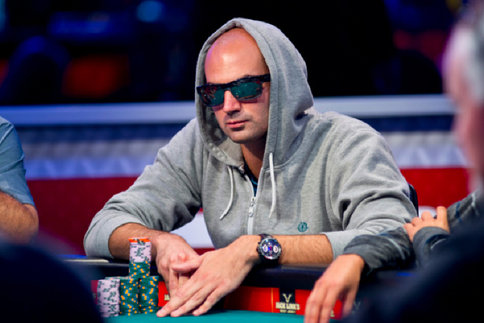 Not only is French poker pro Sylvain Loosli one of the most respected online cash game players, he also made the November Nine in this year's WSOP to take over $2.5million. Oh, and he's a RakeTheRake player too. We caught up with Sylvain to talk about his recent success and more...

Sylvain, thanks for taking the time to talk to RakeTheRake. First of all, congratulations on your recent huge WSOP success; you placed 4th and came away with $2,792,533! Can you tell us a bit about your WSOP experience, and what it felt like to achieve that ?

It was my first time playing the Main Event this year, and actually playing some wsop tournaments! I played two events before the Main, in which I did not cash. I am mainly an online cash game player so it was never really a priority for me to go to Vegas play the World Series. However, it represents something special for any poker player, so I had to go there and finally play few events. I was a bit frustrated by live tournaments before, because I felt that I was running very bad every time I played and EPT or another big tourney.

Anyway, I did put an end to that bad run we could say! Except day 1 where I fell short at some point, my Main Event was a bit of a dream. I had some good tables, played well, and manage to have a very deep stack for 7 days straight. I really enjoyed playing this tournament, not just because of my result but because I met a bunch of friendly players, and it was nice chatting and playing some good poker at the same time.

This tournament is very special, and making a deeprun feels incredibly good. During the last 2 days, I received so many cheering messages from friends and poker fans in France who were following my performance. It's just awesome to know that all these people are supporting you!

Then I made it to the November 9, and many things changed. I signed a sponsorship contract with Winamax, played a lot more of live tournaments and started preparing my FT with my coaches. It's been an incredible 3 months experience, and when I walked at the Final Table on November 4th, I felt ready, confident, and determined to reach my goal: winning the Main Event.

I finally finished 4th, which is a bit disappointing when you are so close to the end, but given the scenario and the cards, I think I played well and couldn't play much better.
That's a great performance, the 2nd biggest French result of all time and a lot of money!

How did you celebrate your win?

We had a big (I would even say legendary) party in Vegas with about 30 people! They reserved me a very special entrance when we entered the club, rockstar like! Then I celebrated also with my friends back in London and Paris.

How much has a win like that changed your life – generally but also specifically in terms of your poker career?

Well, honestly it did not change my life so much. It’s just a great boost for my investments and to make some projects for the future. I already made a decent amount of money before and I have a great lifestyle.

For my poker career however, it changed a lot of things. You will see me much more on the circuit, and I will play more High Roller events as well. I have a comfortable bankroll now, and I feel very confident about my skills in live MTTs. You’re a respected online cash game player, but this was your first attempt at the WSOP and you reached the final 9. How easy was the transition from online to big live tournaments for you?

I played around 10 live MTTs before the WSOP this year. It took me a bit of time to make the right adjustments from online to live, especially because I did not play so many tournaments overall. Playing a tournament with a great deepstack structure such as the Main Event was a great advantage for me. I have a bigger edge when I play with deep stacks, whereas tournament players are in their “comfort zone” when they play under 30 bb. I also learnt a lot during my 3 months of preparation between July and November.

Do you prefer one over the other?
I really enjoy more and more playing live. Even if it’s slower, I feel that I can pick some live tells more easily now. Also, I appreciate the social aspect that you can’t find online…

Are you determined to win a famous WSOP bracelet before you retire from poker?

I am determined to win some major titles, EPT, WPT and a bracelet of course!

You’d said in another interview that the idea to enter the main event came from nowhere, that you’d missed twice with satellites and decided to buy in with your own bankroll. Looking back, do you know what pushed you to make that decision to buy in? Are you generally an impulsive person and poker player?

10,000$ was not much for my bankroll anyway… I just preferred the idea of “being in a freeroll” in this tournament after winning a satellite… I wanted to go to Vegas last year but not many of my friends made the trip, so I gave it up. After playing poker professionally for a while, I thought this year that I should finally go play the Main Event. Good decision I guess! I’m not an impulsive person or poker player however.

You have a masters degree in marketing, and that you found poker while still studying. Do you think you’ve been able to take any skills or knowledge from one area and apply it to the other? Has your marketing brain served you well in poker in any way?

I think my math brain served me more. I did 2 years of preparatory classes before entering my business school, with a lot of math and physics. This is where you learn how to make good scientific reasoning. This is more helpful for your poker skills. The business/marketing skills can help you manage your career as poker player.

There are some great poker players coming out of France at the moment such as yourself; and, of course, there are established players like David Benyamine and Bertrand Grospellier. How strong do you think the French Poker scene is at the moment?

I think the French poker scene is getting stronger every year. You can expect to see more and more French players making big scores!