Are Pensioners the Future of Poker? 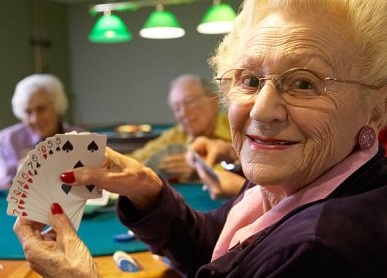 Due to the influx of twenty-somethings over the past several years, many people stereotype poker as a game for younger players. And as for seniors? Well, they're just a small demographic that gets their own WSOP tournament every year, right? But the truth is that senior players could become a VERY large part of poker's future, and here are a few reasons why.

1. The WSOP Seniors Hold'em event keeps growing every year
One sign that more seniors are getting involved in poker each year is the WSOP Seniors Hold'em Championship. This past summer, the tournament reached a pinnacle with 4,407 entrants and a $3,966,300 prize pool. The year before that, it was 4,128 players competing for a $3,715,200 prize pool. In 2011, it was 3,752 entrants playing for $3,376,800....you get the picture, more players who are 50 years and older keep entering the Seniors Hold'em tournament every year.

2. Many Senior Players have Time and Money
A huge reason why so many college kids have transitioned to online poker pros is because they have lots of spare time to dedicate to the game. The only catch is, most of them don't have much money and grind their way up from the micro stakes. Contrast this to many of the new seniors who are coming into the poker world. A good number of them are retired or semi-retired and have some money stored away for poker. And just like college students, they have plenty of free time to learn and play the game.

3. They'll have their own Tournament Series
Apparently, seniors are such a reliable part of the poker market that they're getting an entire tournament series dedicated to themselves. The Senior Poker Tour (SPT) will kick off on January 15th, 2014 at the Horseshoe Tunica (Mississippi) and is set to feature a $1,100 SPT National Championship event this summer. WSOP bracelet winners Tom McEvoy and Linda Johnson will headline the SPT, while several other pros are expected to join them.

We're unlikely to see a complete senior takeover of the poker world. But as you can see from the evidence above, they're certainly a demographic that's going to become much more prevalent in the near future.