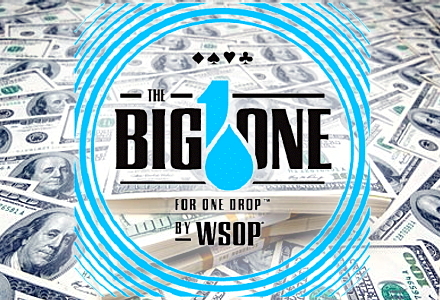 Thought the Big One for One Drop was already big enough? Guess again!... Tom Dwan's face has almost become synonymous with Full Tilt Poker over the years, but that happy marriage is over... The Bitcoin-only poker room SealsWithClubs was hacked, leaving 42,000 accounts exposed. Is this a major blow to the future of Bitcoin? Find out in this edition of the Weekly Flop.

Big One for One Drop expands
The 2012 Big One for One Drop was one of the most memorable poker tournaments in history. Like something out of Casino Royale, 48 players paid the massive $1 million buy-in for this tourney. What's even more impressive is the $18,346,673 payout that Antonio Esfandiari collected for winning, which is by far a tournament record.

So how can the WSOP top this in the 2014 Big One? Well, they've increased the cap from 48 players to 56 players to allow for a larger prize pool. Seeing as how the last Big One filled up rather quickly for a $1 million event, we can reasonably assume that 56 players will register at the 2014 WSOP. The end result: somebody will probably win a prize worth over $20 million!

Tom Dwan and Full Tilt Poker break up
As far as online poker legends go, few are bigger than Tom 'durrrr' Dwan. At age 17, he took a $50 birthday gift from his dad and turned it into a multi-million bankroll. Along the way, he inspired thousands of online poker players in much the same way that Viktor Blom does today. But that was some time ago...

These days, Dwan has become more of a whalehunter in Macau, turning a blind eye to the online poker world. So it made little sense for Full Tilt Poker to continue sponsoring a guy who rarely plays on their site any more. This is even truer when you consider that he wasn't very involved in Full Tilt promotions and barely made it on time to some of their live events. Add in the fact that he's an American and Full Tilt are no longer in the US, and you can really see why they didn't renew his sponsorship deal when it expired.

SealsWithClubs hacked
For over a year, we've been hearing talk of Bitcoin being a viable solution to the occasional difficulties of online poker banking. And SealsWithClubs (SwC) are leading this charge by being one of the few Bitcoin-only online poker sites available. However, the movement took a hit when SwC had their database hacked.
The poker room warned their players to reset passwords after their datacenter allowed an unauthorized user to access sensitive information. Whoever did this posted the passwords of over 42,000 SwC players on a forum, offering to pay experts to uncover the original passwords. We know that some of the passwords were converted because one poster on the forum confirmed that he received payment for services.
Obviously this is SwC's problem and not Bitcoin's. But with SwC serving as a pioneer in the Bitcoin-only poker world, it could be a temporary setback for the increasingly popular virtual currency.