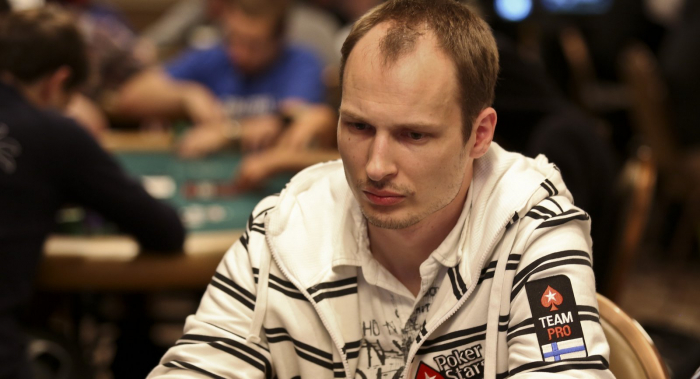 From Brian Zembic getting breast implants for $100k to Ashton Griffin running 70 miles to bank $300k, there's nothing better than seeing poker players make huge prop bets. And now, we have another great one to add to the prop betting hall of fame: Ville Wahlbeck winning a very large sum of money by shooting three-pointers.

As the WSOP champion explained to PokerStrategy, he made a bet with two of his friends that revolved around 100 three's. For every three that he made, the Finn collected $2,000; any time he missed a shot, he'd have to pay $1,000. So if he could make at least 34 three-pointers Wahlbeck would make a profit.

Okay, so making 34 shots from behind the European arc doesn't seem like an impossible feat. But the big hurdle here is that Wahlbeck isn't much of a basketball player. "The weird thing is I never played basketball, I would just shoot it in the school yard with friends," he told PokerStrategy. "I can't really dribble the ball, I have quite an unorthodox style of throwing the ball over my head."

Compounding the problem is that Wahlbeck hadn't shot any three-pointers over the past few years. Because of this, he immediately began regretting his prop bet and thought about buying out of the wager. However, he ended up practicing a little bit and felt more confident about the bet. This confidence translated into Wahlbeck sinking 46 out of 100 three's, which earned him a $38,000 profit.

"I definitely felt the pressure once we started shooting the balls," Wahlbeck said after winning the bet. "To know I could perform at my best with pressure involved was very mentally enjoyable and stimulating."

Fresh off booking a $38k payout from basketball, Wahlbeck has no plans to quit making prop bets any time soon. He vaguely discussed a new wager that involves fitness, eating healthier and dropping weight. Wahlbeck said that he's getting 10-to-1 odds on this bet.