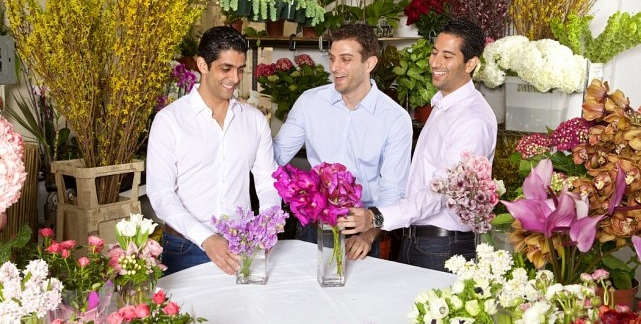 One topic we at RakeTheRake love to discuss is former poker pros who parlay the hard work and dedication that they learned on the felt into a successful business. And one of the best stories that we've heard recently is that of David Daneshgar, a WSOP gold bracelet winner who's done very well in the internet-order flower business.

The fact that Daneshgar found success with flowers is about as unlikely as anything, given that he had no prior experience in the floral world. However, he and his friends, Farbod Shoraka and Gregg Weisstein, saw an opportunity and seized it. That said, let's dive into the tale of how a poker pro and his old college buddies were able to form what's been called the "Etsy of the flower industry."

Career Change
Daneshgar certainly carved out a good poker career for himself, having earned $2.48 million in live tournaments. He caught the poker world's attention in 2006, the year when he grabbed major victories at the Borgata Winter Open ($110k), L.A. Winnin' o' the Green ($198k) and the Bellagio Five Diamond Classic ($330k). He also final tabled both the EPT Barcelona Main Event ($204k) and the WPT Legends of Poker ME ($111k).

Just two years later, Daneshgar was in the spotlight again as he won a WSOP $1,500 NL Hold'em tournament along with $625,443. Unfortunately, the success started drying up for him as he went three years without a major cash. Finally, Daneshgar strung together two big cashes in 2011, when he finished 9th in the WPT Legends of Poker ME ($38.5k) and won a Commerce Hold'em event ($27k). The latter victory is what convinced Daneshgar to take his winnings and go all in on flowers, forming BloomNation.com with Shoraka and Weisstein.

Turning Bad Experiences into Profits
As mentioned before, the trio who founded BloomNation had no experience with flowers. However, they were armed with plenty of bad experiences from trying to send flowers to loved ones. "When you're sending flowers, it's an emotional thing - it's for a girlfriend, or someone who’s sick," Weisstein, BloomNation's COO, told FastCompany.com "You don't want them going, 'This is all you thought of me?'"

The three friends' bad experiences as customers weren't the only things that motivated them. Many flower shops have been struggling in the wake of a changed industry. Shoraka personally witnessed this when his aunt, a florist in Orange County, saw her revenue take a downturn as Trader Joe's and Whole Foods got into the flower game. "Her foot traffic died," he explains. "She didn't really know how to get into this world of e-commerce."

Shops that do find their way into e-commerce still have difficulties remaining profitable. First off, they often deal with huge, corporate-based websites like 1-800-Flowers and Teleflora. "They were being told what to do - 'Fill this order, this is the recipe, this is how much you're going to get for it,'" Shoraka says. "That raw passion of why you're in the business is gone."

As if being bossed around by a distant corporate office isn't bad enough, flower shops also pay huge fees to the websites, sometimes up to 50% of the order. This and other problems facing the industry made Weisstein come to the following revelation: "We thought, ‘We can make this so much better.'"

Pounding the Pavement
While the BloomNation founders were working on an internet-based business, they also spent plenty of face-to-face time with shop owners. They sat down with over 100 florists in the L.A. area and listened to the aforementioned problems to get a better idea of how to change things.

What they came up with was a site that gives shop owners more freedom to advertise their own personally designed flower arrangements. Florists can also create a virtual storefront, which allows them to better reach customers. And the best part for shop owners is that BloomNation only take a 10% cut from each sale, rather than requiring huge commissions or big membership fees.

Customers also appreciate BloomNation because the website cuts down on potential wrong orders. Through a tool called "BloomSnap," florists send customers pictures of completed arrangements to ensure that the order is correct. Daneshgar says that this simple change has contributed to BloomNation having a complaint rate of less than 1%.

Upward Trend
It seems that Danesghar's passion and skill from the poker world have translated well over to the flower industry. He and his friends have completed successful launches in Chicago, L.A. and Las Vegas. This year, they've also scheduled road trips to Boston, New York City, Philadelphia and Washington D.C., with future plans to launch in all of these cities.

Additionally, the founders raised $1.65 million in capital from various firms, which has bolstered their business to include over 3,000 florist shops. BloomNation also passed $1 million in sales in 2014 and have been increasing by 20% to 30% each year. Taking all of this into account, it definitely seems like Daneshgar made a successful transition to his new profession.