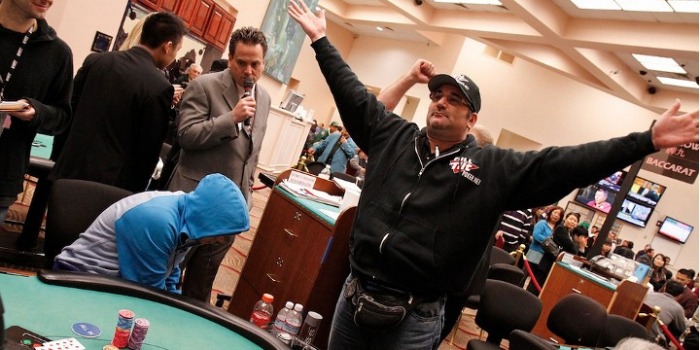 Mike 'The Mouth' Matusow's life definitely seems fit for a movie, so it should be little surprise that his story will be hitting the big screen...Thought bumhunting was just for poker pros? Apparently, famed actors like Tobey Maguire do it too...José 'Girah' Macedo all but disappeared after his online poker scandal in 2011, but now he's thriving in the cleaning business. Has he learned his lessons from poker? Let's discuss this question and other hot stories in the Weekly Flop.

Matusow's Life Story in Development for a Movie


Just last week we discussed how a film is being made about loathed online poker processor Daniel Tzvetkoff. Well, it seems that poker is a hot topic in Hollywood right now because 1984 Private Defense Contractors are developing a movie based on Mike Matusow's 2012 autobiography, Check-Raising the Devil. Here's an excerpt from Variety.com about the film project:

The Mouth is one of the most entertaining poker players of all-time, and there's more than enough YouTube clips to back up this point. So 1984 shouldn't have any trouble spinning his wild life story into a good movie since they're more than adept as a production company. 1984 have produced The Grey, starring Liam Neeson, Killing Them Softly, starring Brad Pitt, and The Voices, starring Ryan Reynolds and Gemma Arterton.


High stakes poker is certainly being given a black eye lately. First, we have Guy Laliberté claiming that his $26 million in online poker losses weren't the product of playing elite players at the nosebleeds, but rather him being cheated. Laliberté told Le Journal de Montréal that Full Tilt players borrowed endless amounts of money from the site to play him and that "two or three" of them may have colluded. Okay...the jury's out on that one.

More recently, word has surfaced that Tobey Maguire may have set up an elaborate scheme to bring whales to the poker table. A source told the New York Observer that 'Poker Princess' Molly Bloom's upcoming book, Molly's Game, is set to blow the cover on how Maguire earned over $40 million in high stakes poker.

A source told the Observer that he would pay Leonardo DiCaprio's entry fee into the games, and DiCaprio's presence would attract billionaires like Andy Beal and Alec Gores. Given that Maguire is regarded as "the single best among the poker-playing actors," he feasted on the billionaires, especially Beal. The New York Post estimates that Beal lost around $50 million in a single weekend in one of Maguire's games. And Laliberté thought that he got taken advantage of...

José Macedo "Cleans Up" His Act


José 'Girah' Macedo seemed to have everything going for him. The 'Portuguese Prodigy' was killing online poker games, had major connections to Dan Cates and Haseeb Qureshi, and earned a sponsorship deal with Lock Poker. Then, Macedo threw it all away by taking advantage of his online poker buddies, sweating them through Skype for what he claimed to be strategy-discussion purposes. In reality, though, Macedo was watching his friends' hands while he played them through another account.

Macedo disappeared from the poker world after the "Girah scandal." However, he's resurfaced in the news after opening a cleaning business in the UK. Macedo and his staff have already cleaned 1,000 bedrooms and bathrooms at the University of Lancaster, and they've got plans to start cleaning kitchens and off-campus apartments.

Only three months after opening the cleaning business, Macedo and his two partners have made €240,000. We can only hope that Macedo's learned from his previous poker mistakes and will operate his current business with honesty and integrity.