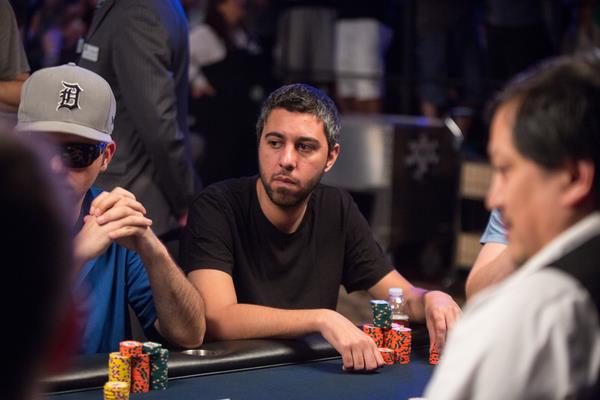 What makes this victory even more impressive is that the Israeli only plays online poker part time and doesn't really play much live poker. That said, one can forgive his disbelief in becoming a WSOP champion. "Maybe the best feeling of my life," Moshi said. "One of the very few dreams that I really wanted to accomplish but didn’t think I really would, like going to the moon type of thing."

One thing that helped the Tel Aviv native combat his inexperience in the live poker arena was the support he received from his rail. Moshi's buddies cheered loudly as the 30-year-old battled through the 9-player final table and on towards his first gold bracelet.


When Event #56 of the 2014 WSOP started, Minnesota native Mike Kachan was still hundreds of miles away on his drive to Las Vegas. "When the tournament started I was in northern Utah driving in and got here with 20 (big blinds)," he said. "The rest was history I guess."

Despite his late start and dwindling starting chip stack, Kachan was able to battle through a 2,525-player field and win a $1,000 NL Hold'em event. Kachan collected a very large $403,483 payout and his first gold bracelet after the victory.

Now that he's a WSOP champion, Kachan looks forward to spending some time in Vegas with his wife and 10-month-old son. He also plans to play in the 2014 Main Event with dreams of winning a second bracelet here.


The end of the 2014 WSOP Big One for One Drop seemed like a dream scenario for Daniel Negreanu to further his poker legend. He was facing lesser-known poker pro Dan Colman heads-up and had the chip advantage on his side. But the exciting thing about poker is that victory doesn't always go to the more-experienced player, and Colman won out in this heads-up battle.

This edition of the Big One was another huge success as 42 players turned out for the event, creating a $37,333,338 prize pool. $111,111 of every $1 million buy-in went towards the One Drop foundation ($4.6m total), which provides clean drinking water around the world. In all, $11 million has been raised for the One Drop foundation.