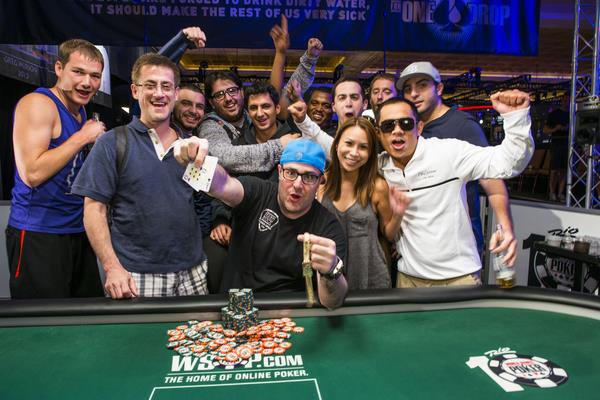 
It's never easy to predict victory in a poker tournament, especially one with 1,475 runners. But going into the final two days of the $1,500 NL Hold'em Mixed Max event, Jared Jaffe just had a feeling that it was his time to shine. "I felt like there were a bunch of spots in the past where I was right there and could have gotten (a bracelet) and I didn't," he said. "I kind of felt like I was in the zone all day yesterday and today. It just felt like I was going to win. Today I thought it was my time."

Jaffe's premonition was right as he went on to win Event #58 and a $405,428 top prize. The key to the 33-year-old's victory was keeping up with the leaders during full-ring play, then really excelling at his strength, short-handed play, over the final two days. "I prefer short-handed," Jaffe explained. "I feel like normally I choose the right spots moreso than when I force the issue a little bit when it is a full ring. The shorter the better, I feel good with heads-up, I feel good with four-handed and six-handed."

With his $405k prize, the Brooklyn, New York pro now has over $2 million in live tournament winnings. Jaffe can also boast of having a WSOP and WPT title, the latter of which came via the 2013 WPT Jacksonville Main Event ($252,749).


Phillip Hui wasn't having a very good series at the 2014 WSOP. By his own admission, he'd "bricked" 25 of the 30 tournaments that he entered. And of the tourneys he hadn't done badly in, Hui only managed a couple of small cashes totaling $7,762.

In the late stages of the Event #59 $3,000 Omaha Hi-Lo tournament, it looked like Hui would finally get a solid cash. However, he definitely wasn't looking like the eventual champion. "At one point earlier, I was (down to two big blinds)," Hui recalled. "I looked down and saw J-9-9-9. In that spot, you just normally go with it. But that was when we were at 11-handed. I folded and then I got the re-draw and got to see six free hands (before posting a blind again) and went back up from there."

He would survive until a heads-up match with Zachary Milchman, where it again looked as if the San Antonio poker pro was on the outs. Milchman held an 18:1 chip advantage on Hui, but remarkably, the latter staged an incredible comeback to win the event and $286,976. Hui reminded everybody of the old 'chip and a chair' adage as he never gave up - not with two big blinds during 11-handed play nor when he was facing an 18:1 chip disadvantage.


The great thing about poker is that anybody can win, any time. Amateur Salmin Jaddi proved this point by navigating through a 2,523-player field to win a $1,500 NLHE event and $614,428. Jaddi freely admitted his good fortune in winning by saying, "It's a story for all amateurs. I'm a business owner. I love playing the game of poker - anyone has a shot to win this thing."

Jaddi owns an IT management and consulting business and plays poker in his free time. Before Event #60, he had less than $100,000 in tourney winnings. However, the Florida native looked like more than just a recreational player as he scored the final table's first five knockouts. Jaddi's pace slowed from there, entering heads-up play with Brandon Hall at a 2:1 chip disadvantage.

But Jaddi presented an image that he "didn't know what he was doing," which helped him steal some pots. He stole enough hands that he grabbed the chip lead from Hall and eventually walked away with his first WSOP victory.