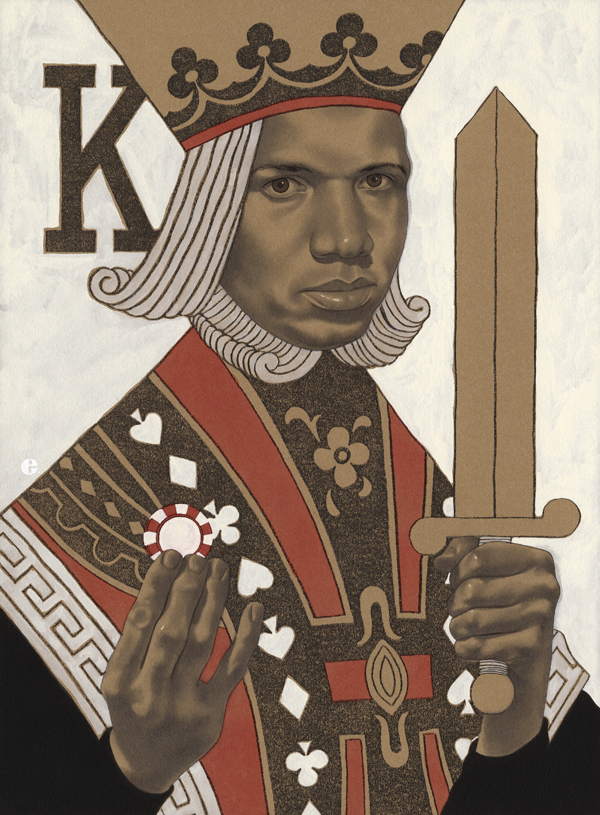 As the oft-declared "World's Greatest Poker Player," Phil Ivey's fame knows few bounds. Ivey has been featured in numerous mainstream magazines and news outlets. So it should be little surprise that the 10-time WSOP champion recently did a feature with Playboy.

Like most articles covering Ivey, the Playboy piece spends a fair amount of time rehashing his rise from an Atlantic City-area teenager to the extremely wealthy poker player that we all know today. Of course, you can read such info in just about any Phil Ivey bio. What makes the Playboy feature stand out, though, is some of the details that it offers on his envious high-roller lifestyle.

Ivey is a big flirt


One thing that you don't read in Ivey's bios is that he's certainly not shy around women. The article's author, Michael Kaplan, discusses how Ivey throws out pickup lines like, "I'm a part-time bellhop. I can help you with your bags," and the classic, "You want to get on my jet, fly to Las Vegas and party in the number one villa at Bellagio?" Not many people can legitimately use the last one, and it definitely worked for Ivey as he picked up several girls from a nightclub.

Surprise! Ivey has an amazing home


Now we move from the not-so-obvious to the predictable - Ivey has a really big home. Kaplan describes the luxury high-rise off the Vegas Strip by writing, "(It's) More mansion in the sky than mere apartment, it boasts a screening room, wood paneling, designer furniture and many bedrooms." Not surprisingly, Ivey keeps some sweet cars at his home, including a Rolls Royce, Aston Martin and Range Rover. Interestingly enough, though, he describes the fancy cars as holdovers from a different point in his life. One also can't forget his luxurious villa in Cabo San Lucas, Mexico, which has been featured on Instagram several times.

He basically has live-in staff


There are no shortage of people waiting hand and foot on Ivey. There's A.P., his long-time friend and driver, there's a master barber from the Bellagio who makes house calls, and then there's Regina, Ivey's live-in personal trainer. The Argentine met Ivey when she trained him during a poker tournament in Barcelona. Afterward, the poker pro offered to pay her the same amount as a full roster of clients if she'd move to Vegas.


Many of us remember Ivey's decision not to play the 2011 WSOP due to Full Tilt's failure to repay players. Some chalked it up to him not wanting to be around affected players, others felt he was sincere in not wanting to play because some Full Tilt players also couldn't play. Ivey made sure to reiterate the latter by telling Kaplan that he had nothing to do with the matter, but because his name was all over the site, he felt terrible about it. He spent significant time trying to find an investor to buy Full Tilt, and when he couldn't, Ivey chose not to play in the WSOP because it wasnt fair to other FT players.


If there's one big mistake that Kaplan made, it was walking in on one of Ivey's high stakes baccarat sessions. Urged by A.P, the writer sat down at Ivey's table, only to see the famed poker pro quickly lose two $50,000 hands. Afterward, Ivey lost his temper and said, "I don't like people f-cking with my mojo." He quickly apologized and tried to play it off like he isn't really that superstitious. However, A.P. later told Kaplan not to let Ivey think he's a "black cat."

There's plenty more in the Playboy feature, including nightclub experiences, the key to Ivey's poker success and his growing number of investments. So make sure to check it out if you get a chance.