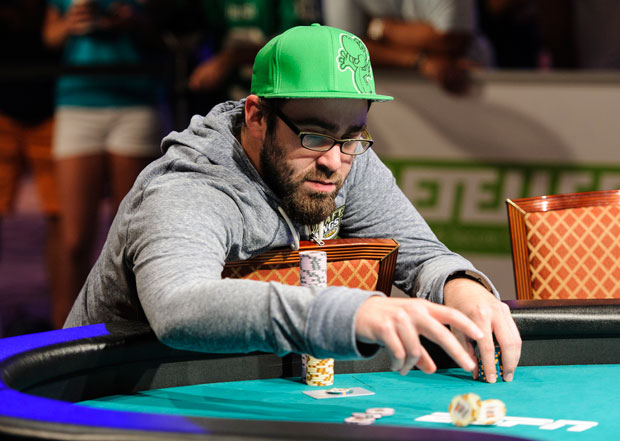 2014 November Niner William Pappaconstantinou (a.k.a. Billy Pappas) is used to winning....just not in poker. The 29-year-old is best known for his impressive foosball credentials, which include five US championships. Pappas has done so well, in fact, that many consider him one of the greatest foosball players of all time.

Now he's on the cusp of greatness in a totally different game after making this year's November Nine. Pappas just completed a foosball tournament in Europe when he decided to fly to Vegas for the 2014 WSOP Main Event. What ensued was a run that nobody could have predicted as he battled through a 6,683-player field and on to the final table. This was especially unpredictable when you look back at his fairly limited poker resume...


Although he's admittedly a recreational player, Pappas, who's the son of pro golfer Bill Pappas, does have a poker background. He worked as a dealer in Salem, New Hampshire's Rockingham Park poker room. Furthermore, he started playing live tournaments around the Massachusetts area in 2010. For an amateur grinder, Pappas' 20 career cashes are a nice accomplishment. Included in this list is a fifth-place finish in a WSOP Circuit West Palm Beach NLHE event ($52,372).

Of course, nothing here foreshadowed that Pappas was destined for November Nine greatness - save for maybe the mental fortitude that he's learned through foosball. "Mentality is huge in foosball, that's what takes you to the next level," he told CardPlayer. "Skill can only take you so far. If you're weak-minded in poker or foosball you have no hope. If you lose a pot and you go on tilt, that's it. If you don’t go on tilt you are going to be much stronger."

More on the line in Poker


While foosball and poker both may require a tough mentality, Pappas is quick to point out that there's far more money involved in the latter. The most that he's ever won in a foosball tournament is $8,000. But even if he busts out first in the 2014 Main Event, he's at least guaranteed a $730,725 prize. Assuming Pappas can win, he's due for a $10 million payday.

"The pressure is a little bit more here, and the money is huge," he said. "In foosball, I get to control the game and do what I do. If I lose the game it's my fault. If I lose here it's still my fault, but I don’t get to control it as much. These guys here are all better than me - in foosball, I am usually the better one at the table."
So can Pappas overcome the skill disadvantage that he's facing when the November Nine meet at the Rio on Nov. 10th? Currently ranked sixth with 17.5 million chips, he's not out of the picture. But Pappas is definitely going to have to channel some of that championship experience from foosball to move up the chip count.