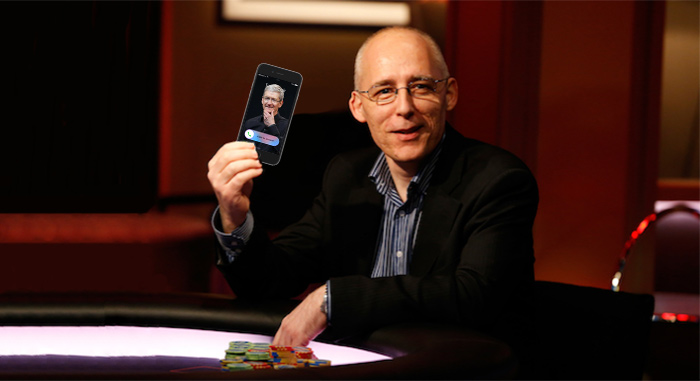 High-stakes poker player and hedge fund manager Talal ‘raidalot’ Shakerchi has just made a £30 million investment into Intelligent Energy. This British company seeks to provide a unique innovation to smartphones by replacing the batteries with hydrogen fuel cells. Let’s continue discussing how Intelligent Energy could revolutionize the smartphone industry as well as make Shakerchi even richer than he already is. We’ll also take a quick look at raidalot’s poker career, which has gone well for an amateur.

Designing Fuel Cells for Apple
Currently, Intelligent Energy are supplying portable generators for mobile masts in India, which needs the generators to back up their sketchy electricity units. However, Intelligent Energy’s bigger goal is to eventually replace the short-lasting smartphone batteries with hydrogen fuel cells that will last much longer. They’ve been in serious talks with Apple about supplying a fuel cartridge for iPhones that would only need to be charged once a week.

The company have also created a system that converts hydrogen into electrical power in hopes of replacing diesel and petrol engines in cars/trucks. However, the low number of hydrogen filling stations and high costs of manufacturing forced them to limit their automotive pursuits.

Brink of Bankruptcy
Intelligent Energy debuted in 2014 with a large valuation of £639.6 million. Unfortunately, they quickly saw their stocks plummet to 11p per share, leaving their valuation at £20.6 million. They then warned investors earlier this year that they had “no certainty that an appropriate funding plan can be implemented at all.”

With just £5.4 million in cash left, Intelligent Energy were worried that they’d soon be out of business. Fortunately, Shakerchi stepped in with a large investment that’ll allow the company to continue working on its hydrogen fuel cell products. According to the Telegraph, this arrangement must be approved by shareholders before it becomes official. But considering that the alternative is seeing the company liquidated, it seems a given that Shakerchi’s investment will be approved.

Talal Shakerchi’s Poker Career
As evidenced by his £30 million investment in Intelligent Energy, Shakerchi is worth a lot of money – £100 million to be exact. And this net worth has given him the ability to play in some big-time poker games. For example, he once played in the 2013 EPT Cash Game with noted pros like Sam Trickett and Isaac Haxton.

Unfortunately for Shakerchi, he didn’t fare so well in this game and ended up losing €1 million as a result. This led to some salacious headlines in UK newspapers about Shakerchi, such as one from the Daily Mail reporting that he “blew” his money in Monte Carlo. The reality, though, is that he simply had a bad run and is otherwise a very skilled amateur player.

Shakerchi has won two PokerStars SCOOP events, including a 2013 SCOOP $1,050 high roller win that netted him $169k. Shakerchi has also made over $2.6 million in live tournaments, which includes a $657k score for winning a 2013 UKIPT London High Roller event.

The impressive thing about Shakerchi is that he continues to do well in live tourneys, even taking 13th in the 2015 WSOP One Drop High Roller and collecting $$289k. That said, we can likely expect more big scores from this poker player/entrepreneur in the future.