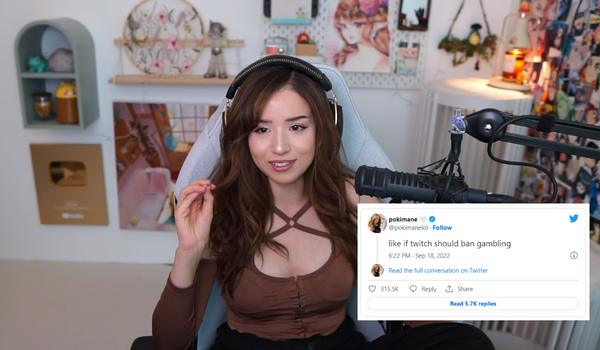 Abraham recently admitted to scamming fans and other creators out of $300,000, so he could fuel his ‘Counter-Strike: Global Offensive’ and sports betting gambling addiction. He confirmed this was the case during a discord call with streamers such as Hasan ‘HasanAbi’ Piker, Matthew ‘Mizkif’ Rinaudo, and Felix ‘xQc’ Lengyel.

All of these streamers, including Devin Nash, Pokimane, and Mizkif, threaten to boycott the streaming service in order to stop gambling streams and reduce addictions.

Sliker stated that his addiction began five years ago when started gambling via the popular game Counter-Strike: Global Offensive. It is possible to place bets on games, whether it's individual players or teams.

He eventually realized that you could bet with real money, and so he did, leading to his addiction and him running out of money to fuel this, a common denominator that eventually occurs for addicts.

Running out of his own money, Sliker sought money from his twitch friends and even fans. Little did they know they would be funding his gambling addiction.

‘I would come across streamers and ask them if I can borrow money… I would lie to them, my initial thoughts were I would be paying them back… I did not intend to scam them.'

Sliker live streamed an apology video, which he began in tears.

Struggling to get his words out, he states that he doesn’t deserve any sympathy for what he has done and that he is ill.

‘I’ve lied to multiple people…but I’ve paid some people back but I’m not going to say I’m proud as there are so many people I still need to pay back.

One of those he owes is fellow streamer Trainwreck, who supposedly gave Sliker $100k.

Sliker has lost multiple friends along the way, due to his addiction. He allegedly told a few of his friends what the money would be for, and because of this they got angry at him and cut him off.

As other streamers and many fans can see, what Abraham did was wrong but he was suffering from an illness, a gambling addiction that makes you do things that can hurt other people and yourself.

Due to this, top streamers on Twitch took to social media to force the company to stop betting content.

Twitch responded, with some positives but it was not quite what some streamers were hoping for.

An update on gambling on Twitch. pic.twitter.com/lckNTY9Edo

Although they have decided to stop streaming gambling sites that include slots, roulette, or dice games that aren’t licensed in the US or other jurisdictions that provide sufficient consumer protection, it still allows room for other gambling content to remain on the site. Including gambling in video games, which is the main source of Abraham’s addiction.

One popular streamer, Devin Nash replied to twitch with force,

This is NOT a gambling ban. Headline readers are getting this wrong. Twitch doesn't say they are banning luck-based gambling - ONLY certain websites that "aren't licensed in the U.S." - Unfortunately, this leaves plenty of room for gambling to remain on the website come Oct. 18th pic.twitter.com/99s2A7Hzd0

Although some of the community have come together to help prevent gambling addictions, some other big streamers are questioning where this energy was during other major issues on the platform. Tanya DePass, a content creator and activist also known as ‘Cypherogtyr’, asked ‘where is it for the constant racism, homophobia, transphobia, and misogyny on the platform?’.

Twitch needs to step up and take some responsibility.