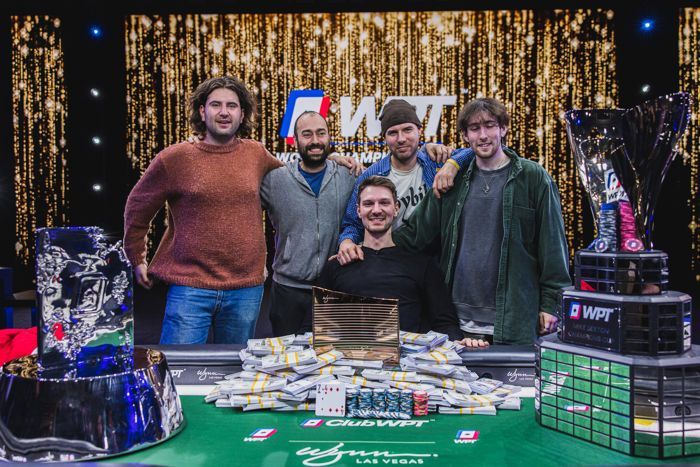 Eliot Hudon has won the largest World Poker Tour main tour event ever held. The Canadian online poker player defeated a record-setting field of 2,960 entries in the $10,400 buy-in WPT World Championship at Wynn Las Vegas, securing the $4,136,000 top prize and adding his name to the Mike Sexton WPT Champions Cup. Even though this multi-million dollar payday is life-changing money, Hudon told Card Player that he doesn’t expect his day-to-day to change too much after this breakout win.

“I really like my life in general. I like my apartment, my friends… I might buy a new computer, but besides that – I still need to pass my driver’s license test, so I can’t even buy a car,” said Hudon. “The one thing I know for sure is [I’m] going to be investing part of it and also just keep playing more live poker. This is my dream, right? So I don’t really care that much about the money. For me, the money is just a tool to play some more and win more and collect some trophies.”

Prior to this event, the Montreal, Quebec resident’s largest live tournament score had been the $113,800 he earned as the 63rd-place finisher in last year’s World Series of Poker main event. Now, thanks to this massive win, he is already among the top 25 on Canada’s all-time money list.

“I’ve been playing for three and a half years,” said Hudon when asked about his tournament experience. “I started playing $1 tournaments. One day I won the $5 ‘Marathon’ on PokerStars. I just kept winning at lower stakes. So eventually I could play up to $1,000 tournament, which has been also going well. With that money I decided to start playing some live poker, like this tournament here, and that also went well.”

In addition to the title and the money, Hudon also earned 3,000 Card Player Player of the Year points for the win. This was his first POY-qualified score of the year, but it alone was enough to catapult Hudon into 58th place in the 2022 POY race standings presented by Global Poker.

The final table was set in the early morning hours of Dec. 19, with playdown from 37 to the final six taking roughly 18 hours. With Hudon’s elimination of Lucas Foster in seventh place ($704,000), the final table was officially set for 4:00 PM on Dec. 20.

It didn’t take long for the action to heat up after cards got back in the air. On just the fourth hand of the day, the two largest stacks at the table clashed in a massive preflop showdown that shifted the balance of power at the top of the leaderboard.Chip leader Benny Glaser moved all in from under the gun with Ad, Js. Hudon, who was second in chips at the time, called all in from the hijack for 76,800,000 with Ks Kh, setting up a massive pot with the lead on the line.

The board came down 10h, 7c, 5s, 10d, 2h and Hudon’s big pair held up to see him double to over 157.6 million while Glaser slid to 72 million.The first knockout of the day saw Colton Blomberg get all in with Ad 8d facing the Js, 9h of Glaser, who called Blomberg’s small blind shove of just over 6 big blinds from the big blind. The board brought four spades to give Glaser a winning flush, eliminating Blomberg in sixth place ($1,001,050). This was by far the largest tournament score ever for the cash-game-focused Arizona resident.

The next bustout saw Hudon pick up pocket kings for the second time in the first 14 hands. He min-raised to 3,200,000 on the button and bracelet winner Frank Funaro three-bet all-in from the small blind with A-10 for 28,400,000. Hudon made the call and the runout improved him to kings full of jacks. He chipped up to over 177 million after the hand, which was just shy of 60 percent of the total chips in play. Funaro earned $1,301,000 as the fifth-place finisher, growing his lifetime earnings to $2,860,255 in the process. Adam Adler’s run in this event came to an end when his nut flush draw failed to improve against the second pair of Hudon.

The two-time WPT L.A. Poker Classic final tablist was left short after his A-2 was unable to win a battle of the blinds against the pocket queens of Glaser, who had slid to the bottom of the counts during three-handed play. Moussa managed one double up after that hand, but soon was all-in for about eight big blinds with As, 3h facing the 6d, 5d of Hudon, who had shoved from the small blind. The flop came down 4s, 3d, 2c to give Hudon a six-high straight. The Qs on the turn meant Moussa was drawing dead, rendering the Kd on the end a mere formality. Moussa cashed for $2,095,000 as the third-place finisher, which was roughly six times larger than his previous top tournament score. 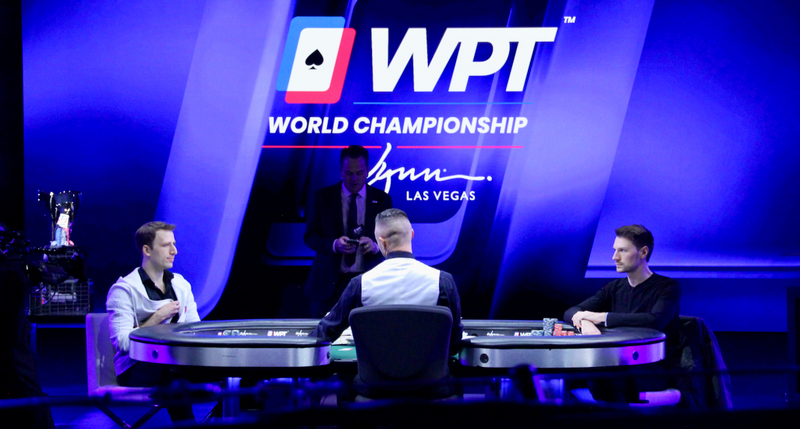 Hudon entered heads-up play with 228,200,000 to Glaser’s 67,500,000. After an early chopped pot, Glaser managed to string together a few wins in a row to grow his stack to over 90 million in time for the final hand of the tournament.

The 5c completed Hudon’s nine-high straight. Glaser went into the tank before moving all-in for 59,000,000 as a bluff. Hudon quickly called and just like that, the tournament was over. Glaser earned a career-best payday of $2,830,000 as the runner-up. The four-time WSOP bracelet winner from the UK now has $6,507,656 in recorded earnings.
"The success of the WPT World Championship at Wynn Las Vegas was a spectacular way to commemorate 20 years of global, WPT events and the many players who have made WPT what it is today. We attempted to make this a true festival atmosphere and are so grateful for the overwhelming reception we received,” said Adam Pliska, CEO of the World Poker Tour. “On behalf of the WPT Family, we want to welcome Eliot to the WPT Champions Club and congratulate him on securing his honored role in the WPT legacy."