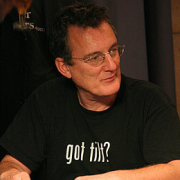 Since appearing on English Comedian Richard Herring's TV Chatshow 'Heads up with Richard Herring', Barny Boatman has often been seen using a little Barney Rubble figure as a card protector, given to Boatman as a gift by fellow UK Poker Pro Harry Demetriou.

Barny Boatman is a London-born, English poker pro - perhaps best known for being one of the original four Hendon Mob poker players along with his younger brother Ross Boatman.

Barny has enjoyed a long and varied poker career, and was a key figure in the early days of televised poker, having appeared regularly on the TV series 'Late Night Poker'. In addition to his regular appearances on 'Late Night Poker', Barny Boatman had his own TV show entitled 'Barny's Home Games', in which he attended various poker home games around Britain. Although a WSOP bracelet has always evaded him, he was the first poker player ever to reach 3 consecutive final tables at the World Series of Poker.

Often truant, Barny Boatman left school at the soonest available opportunity and spent quite some travelling soon after, having visited and worked in Australia, Barcelona, Hong Kong, and Sri Lanka.

Barny got his first taste of poker at home games with friends, before later moving on to play regular poker tournaments at The Vic on Edgware Road, where he won the first tournament he entered to take around a £2,000 prize.

In addition to playing poker, Barny has written several articles for the Hendon Mob website, including write-ups of major poker tournaments and events, and has contributed poker lessons to the site www.internettexasholdem.com. He has also featured as a commentator for Celebrity Poker Club, Poker Nations Cup, and World Heads-up Poker Championship - to name just a few.