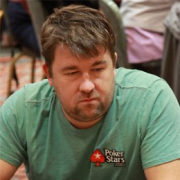 aka 'Money800' on PokerStars

Moneymaker is not a Chris's chosen nickname, his German ancestors were makers of silver and gold coins and so chose the name 'Moneymaker' as a modification of their last name 'Nurmacher'.

Born in Atlanta, but long-time resident of Nashville, Tennessee, Christopher Bryan Moneymaker is a seminal poker success story in his own right. He is credited with significantly opening up the game to the US, following his 2003 World Series of Poker Main Event win. Chris Moneymaker was the first person ever to become a poker world champion having qualified for the event through an online poker site. This impressive victory by an 'average Joe' - rather than by a seasoned Poker Pro - is said to have resulted in an explosion of new poker players in the US, spreading a belief that anyone could win big at poker. The Poker press described this resulting influx in new poker players as the 'Moneymaker effect'.

Chris had a book published about his success in 2005 entitled 'How an Amatuer Poker Player Turned $40 into $2.5 million at the World Series of Poker'. Following his big win, he became a PokerStars spokesperson, and set up his own company 'Moneymaker Gaming'.

Before poker, Chris Monymaker worked as a comptroller. He holds a Master's Degree in Accounting from the University of Tennessee. His total live tournament winnings (as of 2010) totalled in excess of $3 million - nearly all of which he has made from WSOP cashes.