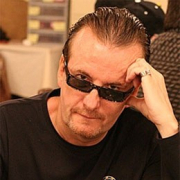 aka The Devilfish, The Clock

Prior to the nickname 'Devilfish', Ulliott was known as 'The Clock' because he once used a grandfather clock as a buy-in to a poker game in which he knew a furniture dealer was playing.

Dave "Devilfish" Ulliott is both a professional gambler and poker player. Dave won his first ever bet at 50:1 when his father took him to the bookies for the first time. Not long after leaving school he would spend his lunch breaks with work colleagues, picking winners at horse racing, but he was eventually fired for taking an afternoon off to go to the races.

Ulliott later became part of a safe-cracking team, and on one occasion robbed a safe from a betting shop and took it home in a pram. He was eventually caught and was sentenced to nine months in prison. Dave "Devilfish" continued criminal activities and went back to prison or a police cell a fair few times, but went straight soon after meeting his second wife.

Ulliott entered the World Series of Poker in 1997. He borrowed and lost substantial amounts of money, burning a few bridges along the way. He eventually got a break, and took $180,310 and a WSOP bracelet in the $2,000 pot limit Texas Hold'em event. Immediately following the tournament he had a great two-week run of success, winning between $10,000 and $20,000 every day. Ulliott returned to his regular casino in Leeds with $742,000 in cash.