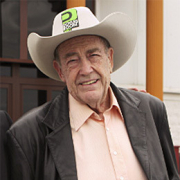 Doyle Brunson went to college on both track and basketball scholarships. He played in the NBA for the Basketball team The Minneapolis Lakers, but his basketball career was suddenly cut short following an accident at a factory in which he shattered his leg. To this day Doyle can be seen with a crutch at the poker table as the leg has never properly healed.

Doyle Brunson is a bona fide poker legend; he is considered the patriarch of modern poker and is attributed with popularising the sport as well as having practically invented Texas Hold'em.

In addition, Brunson has won a record-breaking ten World Series of Poker Events (winning Bracelets for four consecutive years in a row), and a World Poker Tour title which he managed to achieve in the same year as winning a WSOP Bracelet. He was also the first person ever to earn $1 million from poker tournament winnings. In 2006 - the year following his record tenth WSOP Bracelet - Bluff Magazine voted Doyle Brunson the most influential force in the world of poker.

Doyle was the lead figure in the infamous group of poker sharks 'The Texas Rounders' who, according to The History Channel, cleaned Texas Dry playing high stakes poker in the 1950's and 60's. In 1962 Brunson was diagnosed with cancer and was told he had three months to live, but he is still alive and kicking, and playing poker at an elite level - his mind as sharp as ever.

Doyle Brunson has written books on poker, including the guide to Texas Hold'em 'Super System' which is the best-selling poker book of all time. He also writes a poker column for the British newspaper 'The Telegraph', and has released a sequel to 'Super System'.