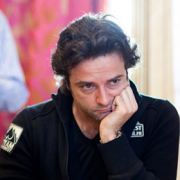 Fabrice Soulier was one of four characters featured in the 2006 film "That's Poker" - a documentary which tracked the lives of professional poker players in Las Vegas.

Currently residing in Las Vegas, Fabrice Soulier is a French poker pro with more than $3.2 million (as of 2011) to his name from live poker tournament winnings. In 2011 Soulier took down the WSOP $10k H.O.R.S.E Championship for $609,130 - it was his first WSOP bracelet. In 2001, and again in 2006, Soulier was named the number one French poker player.

Fabrice Soulier left France in 1998 to try and make a living playing poker in the casinos of the United States. With a relatively small bankroll he settled in both New York and Las Vegas, establishing himself as one of very few French expatriate pro poker players in the US.

Obtaining a University degree in International Relations, Soulier followed his dreams of making films, and took a job as an assistant director. Before turning his hand to playing poker professionally full-time, Fabrice Soulier was director of the television shows Un Gars, Un Fille (A Guy, A Girl) and Farce Attaque (Farce Attack). As well as directing, Soulier has appeared in front of the camera alongside Bertrand Grospellier as a teacher on the French poker show NRJ Pokerstars. In 2007, seemingly not content with playing poker, and appearing in film and TV about the game, Soulier launched the online poker magazine Madeinpoker.