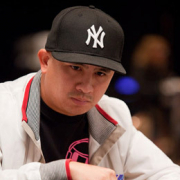 It is widely believed that J.C Tran is behind the online Full Tilt account 'onTheRize' - a player who made over $1.4 million from Full Tilt online cash games in January of 2009 alone.

Born in Vitenam as the youngest of eight children, Justin Cuong Van Tran is a Vietnamese-American poker pro whom lives in Sacramento, California. When starting out in poker, Tran built his bankroll by playing $9/$18 games at Sacramento's Capitol Casino.

J.C. Tran is self taught, and claims to have learned everything he knows purely from experience. Tran has a degree in Business Administration from California State University, but chose to pursue poker as his chosen profession. It was while he was at University that his brother took him to a local casino for his first poker game, and he quickly became hooked.

J.C. Tran has won two WSOP Bracelets, a WCOOP main event, a WPT title, WPT Player of the year (fifth season), the World Poker challenge, and has made five final tables at the WPT. 2006 was a huge year for Tran, making ten final table appearances in major tournaments, and finishing third in the Card Player 'Player of the Year' race. During the course of that year he made over $1.1 million! To date, Tran has made over $8 million from live casino poker, and has substantially added to that sum with over $600k of online poker earnings.

When not playing poker, J.C. Tran likes to go fishing and, like many of his fellow poker pros, take in a round of golf. He also enjoys listening to music - mainly hip-hop and R&B.