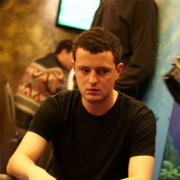 Before becoming a poker pro, James Akenhead worked as a railroad conductor.

James Akenhead is a London-born and based English professional poker player. He is sponsored by Genting Poker and is part of the London poker group The Hitsquad.

Akenhead's most significant live tournament poker achievment to date is his 2008 World Series of Poker 2nd place finish, where he collected a $250,000 prize. He then went to have a good year in 2009, making the final tables of both the WSOPE and WSOP main events but was not able to make it beyond the final nine in either case. Akenhead was the only British player to make the final table at the 2009 World Series of Poker.

James Akenhead finished fourth place in 888.com's 2008 UK Poker Open, and is a regular on the Grovesnor UK Poker Tour. Other significant wins for Akenhead include a first place finish at 2009's Poker Million 8 tournament, which saw him take a $500,000 prize.

In terms of online poker, James Akenhead enjoyed a very successful start to 2012: Under the screen name 'Aspirin1', Akenhead won the January PokerStars Sunday Million event, banking an impressive $213,750. James battled through a field of 7,125 players to take first place and the big cash prize.