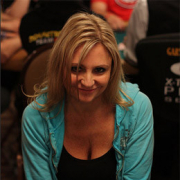 upposedly, Jennifer was so good even from a very young age, that her father would often put her at the table in his place during his regular home games whenever he was down.

Jennifer C. Harman-Traniello is an American poker professional. Raised in Reno, Nevada, Harman started playing poker at the young age of eight years old, taking an interest in her father's regular home games. Despite being introduced to the game so young, she did not make poker her sole focus until later in life; instead she pursued education, and studied (close to home) at the University of Nevada, Reno, graduating with a degree in Biology.

When she first decided to pursue poker on a professional basis, it estranged Harman from her father for several years - the two having almost no contact for the entire time. In 2000, Jennifer won her first World Series of Poker bracelet for the No Limit Duece to Seven Lowball event - a game that she had never played prior to the event, receiving only a five minute crash course from fellow poker pro Howard Lederer shortly before. She is one of very few women to hold multiple WSOP bracelets.

Jennifer Harman has undergone two kidney transplants - one as a child and a second one later in life. She took a year away from poker in 2004 to undergo her second kindey transplant, and shortly after the operation she founded the non-profit organisation Creating Organ Donor Awareness (CODA). In addition to her work with CODA, Harman is a frequent Charity Poker Tournament host, and is a supporter and fundraiser for the NSPCA - the Nevada Society for the Prevention of Cruelty to Animals.