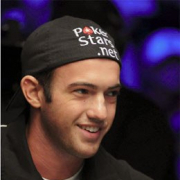 aka The Kid, jcada99

Following his dream to one day open a bar, in late 2011 Joe Cada proudly opened "Cada's Poker & Sports Grill in Sterling Heights, Michigan - near his hometown of Shelby Township.

Joseph Cada is an American professional poker player from Shelby Charter Township, Michigan. His most significant poker achievement to date is his 2009 World Series of Poker Main Event win - a finish which saw him take $8,546,435. Cada became a representative of Team PokerStars just weeks before his 2009 WSOP triumph, and in walking away from the tournament with a bracelet at the age of just 21, he took the record from fellow pro Peter Eastgate for youngest champion ever.

Although from a family of passionate card players, Joe Cada started playing online poker at sixteen years old and his parents were vocal about their disapproval when Joe chose to pursue poker on a professional basis. It is perhaps his card-playing family heritage though that makes him such an ardent advocate for the legalisation of gambling.

When Joe first started out he held two online accounts with his brother Jerome (the first was at PartyPoker) but eventually lost all the money. At 19 he was too young to play live poker in the states, but was able to play poker in a casino just across the border in Windsor, Ontario. Cada soon made enough money from his casino poker to enter tournaments in Costa Rica and the Bahamas.

Using the online identity 'jcada99' Joe Cada was reputedly playing roughly 2,000 hands a day on Pokerstars around the time of his big World Series of Poker win. Prior to the tournament though, Cada was in a $150k downswing which meant he had to find other people willing to back him for the event in exchange for half of his winnings.