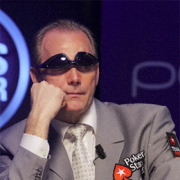 aka The Flying Dutchman

Marcel Lüske has recorded and released an album of easy listening covers (even though he may not see it as such) entitled "More Than Just A Game". Lüske joins the increasing number of middle-aged male celebrities making ill-advised ventures into music recording and performance. You can hear previews of some of the songs from "More Than Just A Game" at www.marcelluske.com

Born in Amsterdam in 1953, Marcel Lüske is a Dutch professional poker player. Having learned the game in market cafes, Lüske quit his job in 2003 to play poker on a professional basis. Although a WSOP bracelet has so far evaded him, Lüske did make it to the final ten in 2004's WSOP Main Event, and his tournament winnings (as of 2009) are in excess of $3.7 million- his twenty WSOP cashes contributing $1,173,396 to that total. He has also twice been awarded Player of the Year at the European Poker Awards - initially in 2001, and then again in 2004.

In addition to playing, Marcel Lüske has mentored and generally encouraged the development of younger poker players such as Kirill Gerasimov and David Williams, and formed the Circle of Outlaws - a group dedicated to the development and promotion of young poker players.

Lüske has made two appearances on the television show Late Night Poker, and - with Noah Boeken - produced a Dutch TV show entitled Veronica Poker in which celebrities were taught to play poker. He has also made appearances in other poker TV shows such as Celebrity Poker and Poker Kings NL.