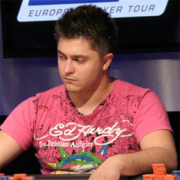 Maxim Lykov has often noted in interviews that he intends to become the greatest Russian poker player of all time - a not too distant goal when you consider that he is already in the top ten Russian players on the live tournament circuit!

Maxim Lykov is one of the highest earning Rusian live tournament poker pros of all time, and has a World Series of Poker bracelet and European Poker Tour title to his name.

It was in 2005 while studying Engineering at University in Moscow that Maxim Lykov first started playing poker. Initially viewing poker as just a bit of fun, and nothing more than a past-time, he soon took to the game's emphasis on analysis and strategy, realising he could earn serious money.
By the following year he was earning impressive money from online poker; claiming to have only ever made two $40 deposits, his bankroll quickly became huge. As of 2011 his total live tournament winnings were in excess of $1.4 million. He is a member of Team PokerStars Pro and plays online under the name 'Maxim Lykov'.